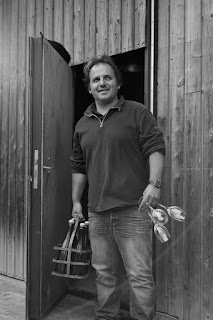 (Image with courtesy of Tue Juelsbo - shot with a Leica M9)


In early November I had the pleasure to meet Jérôme Prévost here in Copenhagen @ restaurant *Kadeau (*food is absolutely gorgeous – incredible deep centred with lots of earthy, gamey and umami flavours).

It always a treat - life affirming to met up with the kind of winemakers, which are so humble and relaxed like Jérôme. To me it’s in sheer contrast to the stressed “office life” most of my friends and I live.  It’s one of the main reasons, why I can never get tired of wine and why I have decided to write about it.

His wines are not bad either – in fact, he was the first - and I still consider him a pioneer – taken the sometimes one-dimensional baroque profile of Pinot Meunier into a multifaceted landscape.

Jérôme resides in Gueux – just 12 km west of Reims. He calls the estate La Closerie where he has two hectare of +40 year old Pinot Meunier. The parcel is named “Les Béguines”. Jérôme told us, that he has acquired nearby land and planted Pinot Noir, Chardonnay, and pinot gris. However the vines are still in their youth – but this will of course be very interesting to follow, despite the production will be very limited. Currently two wines are on display. The 100% Pinot Meunier (non-dosage) La Closerie “Les Béguines" and his rosé “Fac-Simile” (dosage: 2 g/l) – also a pure assamblage Meunier. However he also used to make a third cuvée “D’ailleurs” which I have been fortunate to taste in London in vintage 2003. Absolutely spectacular Champagne and one of the first Jérôme Prévost Champagnes I tasted. As I understand it – it’s only a two time offering – in 2000 and 2003 vintage and the difference was selective plots on the “Les Béguines” parcel and it spent one year more in barrel.

A key element with his Champagnes is their fined tuned food pairing abilities.  Champagne are in general a treat to the table, but especially with “Les Béguines” it becomes a magical catalyst.  I think it’s very much related to the wide spectrum of spices and herbal character his Champagnes offers.

The intro wine served this evening - with six lovely snacks - was the challenging 2010 vintage of “Les Béguines".
Jérôme lost one third of his production in 2010 due to a devastating rainstorm, which torn Champagne between 15th <> 17th of August. Despite you sense it’s not a Champagne that has the depth of previous vintages – it’s still possesses good freshness and acidity sparkle.  Again – the Champagne took a step up in companionship with food.

We continued with the 2009 vintage, which has greater nerve and precision. I have tasted it before and I found some of the same keynotes present like: Black cherries, oat flakes, pear, cornfield, almonds, sour dough and these lovely spices. The 2009 are still tight, with very little oxidative character. Jérôme told us, how the bottling of his Champagnes sort of takes them into a reductive winter hides, where It can take up to six years before he can recognize the product he worked with in the cellar, before he bottled them.  Knowing this, makes we wonder if we/I are in fact drinking his Champagnes too early?

His rosé “Fac-Simile” in vintage 2009, was next. At my table the judgement was quickly leading into a nice but somewhat simple product in comparison with “Les Beguines". I was a bit sad it turned out like this – not that I strongly disagreed that his “white” Champagne is better and more complex. However I don’t  think you should always classify – especially when comparing two very different products. Bottom-line is that I think the rosé has something to offer and overall fit’s into a very elegant style of rosé, which has more to say than those somewhat fruit crazy rosé offerings, with too much oak treat.

So in order to put some focus on his rosé I decided to have the 2008 vintage a couple of weeks later. 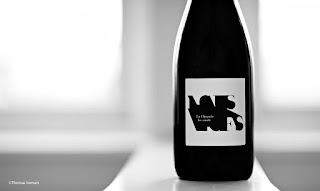 I am confident “Fac-Simile”is a Champagne that can age – and WILL change a lot with cellaring. Simple is not the right label – I think some will realized in time.

Both the ’09 and ’08 are currently very shy and taut – almost at a degree of being reductive. However the debut vintage ’07 is not at all like this and though it might not be as robust as ’09 & ‘08 it have already taken on several layers and an expressive style; revealing lots of oxidative notes.

The ’09 flirts with “simple”  - yet pleasing light red perfumes, such as raspberries, strawberries and some apricot.  Like the ’08, it’s lights on its toes and has an adorable fine structure. The ’08 are made in the same frame, but have a deeper fruit intensity and complexity.  The trick to bring out its beauty is to follow it slowly over an evening and pay attention to its structural heartbeat. A way to do that is to choose a bigger glass than a regular flute and raise it temperature. Around 14 degrees things start to happen and it’s so defined at this temperature, despite still being very youthful. Here the bitterness takes a step back and the structure unfolds far more energetic signals on the palate. When I had the ’08 at home, it never became a bouquet revelation, but more a Champagne, with enormous elegance, fascinating bite and energy on the palate. I would however be very patient with “Fac-Simile” and wait these 5-6 years.

Next was 2008 “Les Beguines". I tasted it a month before the tasting and already knew what was coming. I was not disappointed – it could very well be the most impressive vintage I have tasted and it’s so deep and complex. Will of course be even better, but there is so much adorable lush fruit and energy, so I can be enjoyed already now.

We continued with the 2005 vintage of “Les Beguines". Jérôme is not at all pleased with this vintage, which he thinks has some very unfortunate rotten notes. It’s once again the big dilemma of ’05, where many producers had to deal with rot, which can shape like mushroom, moist cellar and rotten potato notes.
I thought the ’05 was fairly okay, when being served, but the more air it attracted the more you sense these funky aromas, which is also an issue on the palate, where it breaks off a bit short.

Indeed a fine tasting and a real pleasure to met Jérôme Prévost, whom I plan (and hope) to visit again in Champagne in 2013.

I share your enthusiasm regarding Jerome prevost and his usage of grapes in a different manner. Interesting to read that he has been planting Pinot blanc. I was under the impression that planting other grapes than the classic 3 was forbidden. I think i recall a producer and a farmer in champagne once telling me that. i googled it and found the below link, where it is also stated. Wether it is true or not i don't know. http://www.thewinedoctor.com/regionalguides/champagne3varietyvat.shtml

As you probably know these old varieties are in fact still in Champagne and it’s only the use of Gamey, which is not allowed anymore. If you know Les Clos / Les 7 from Laherte or “La Bolorée” from Cédric Bouchard, you know what I am talking about.

I think you are right about it’s not allowed to re-plant these varieties, but allowed if they are already there. The rule is from 1930-I think. If the parcel Prévost have acquired did already have Pinot Blanc – I am not sure. I could also imagine, that if the vineyard was once a Pinot Blanc vineyard and replanted with Chardonnay that legally you could replant it again with Pinot Blanc.

Like I said – I am not sure, but I have asked someone if it’s true…so stay tuned.

Hmm... Just got to know Les Beguines some month ago (LC 09) and didn't found a source for the old "vintages". Now I bought some LC10 bottles. But with your tasting notes I'm not so sure if I will touch it in the near future.
Any suggestions on future potential?

@ Anders – Oaky…so I have asked an expert – who is a Champagne producer and makes damn fine Champagne if you ask me…he should know the rules.

It’s partly true what we concluded; that it wasn’t allowed to replant those grapes to “new land" that had never had a vineyard. If you in fact had a vineyard – no matter what grape material was on it (pinot, Chardonnay..etc) you could plant whatever you wanted.

However the Champagne Appellation have been updated since, so Pinot Blanc, Arbanne, Petit Meslier, and Pinot Gris now belong side by side with the 3 classic grapes; Chardonnay, Pinot Meunier and Pinot Noir. So now you can do whatever you want with these grapes.

My “source” ;-) – also says “But even with this easier regulation, it doesn't sound like those old grapes are going to be more planted, it is more the opposite, due to their yield consistency matters".

@ Philipp. Vintage 2010 (LC10) will not be a long runner if you ask me. But easily 5-6 years – no problem. I would imagine it would be perfect in 3 years time. Vintage 2009 (LC10) will age better. Again it depends what you like. If you in general are not that hooked on old Champagne you could start drinking in 4 years time. If you DO like the secondary aromas of Champagne and those autolysis notes, then do by all means cellar in longer. It can easy to 8-12 years.

Interesting. Thank you for the clarification. Good "source" ;-)

Just a correction - Jèrôme just sent me an e-mail.

It was NOT Pinot Blanc, but Pinot Gris he had planted.

I have updated the information now.

Thanks in advance,
Kyle