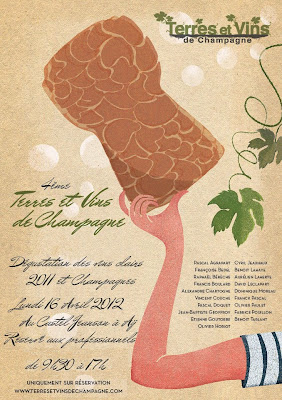 A must for real Champagne lovers.
Sadly I can’t make it this year due to a business trip to Rotterdam. I will miss it more than you know, but I will return for 2013.
Indsendt af Thomas kl. 6:43 PM 5 comments:

I realize that this blog is turning towards two categories: Natural Wine & Champagne.

I am eager passionate about both things, but from starting this blog some 4½ years ago my preferences has narrowed. At the same time I started this blog, I also sourced my wines from maybe 10 domestic wine importers – even had wine sent from Germany, France and Italy. Today I use mainly one importer and have 2-3 others that I also like.

Looking forward, I face an obstacle of going around in circles with this blog and not being able to present you with something “new”. Will it be boring just to read about an “old wine” in a new vintage? I have to think about this and maybe change the concept of this blog – turning away from tasting notes to another template?

Meanwhile…let’s have a look at a classic: A Champagne – yet something which is almost new from one of my absolutely favorite producers. 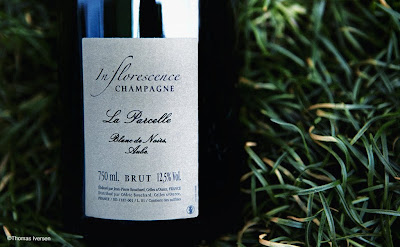 Almost, means – that I have in fact tasted it before in another vintage (2003) and written a small notice, when I visited Cédric in April-2011. Until vintage 2004, the wine has been made from a close friend of the family. From ‘04 Cédric makes the wine himself. It’s also the first time the Champagne is available here in Denmark. Since the first release of La Parcelle, the 1999 vintage, the Champagne has been sold exclusively in Japan and later in US. Slowly the wine has become more accessible around the world, but like always with the Champagnes of Cédric Bouchard, the wines are produced in microscopically numbers.

Before I opened it, I couldn’t help to think how it would compare vs the standard Inflorescence and Les Ursules, which are both crafted from Pinot Noir and Champagnes I know very well.

The similarities are again a Champagne with staggering level of purity. It’s a clean cut diamond, which sparkles with clarifying sensorial sweet fruit, black cherries, currant perfumes and wrapped in Cédric’s always sleek corset where delicacy are brought to a sensational level. The trademark of his Champagnes are breeds capturing their own dimension and La Parcelle is no exception.

Where it takes on it’s own agenda – especially compared vs Les Ursules are more yellow fruits, flowers and ginger. The structure is also different – feeling even silkier. I don’t always believe in what is best – but you could say Les Ursules are somewhat deeper, more structure, compact and complex.

Having said that – I absolutely adored it, especially how it orchestrated the tonality between Pinot, yellow fruits and this lovely subtle ginger appeal. This I have not seen before from Cédric Bouchard and in fact it pairs even better with food than Les Ursules because of this.

This blog might face some challenges, but when Champagne is this good – why on earth should I keep searching for alternatives just to present something new and shiny? 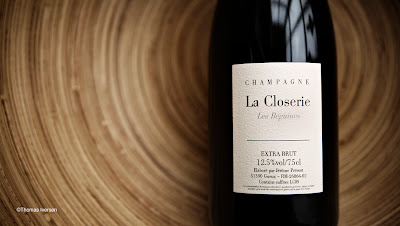 My first date with a Champagne from Jérôme Prévost made me realize that the expression of Pinot Meunier doesn’t have to be a baroque experience. Today I know of maybe two or three producers, which can take this grape to such sophisticated delightfulness and Jérôme Prévost is one of them.

His Champagnes are getting more and more sought after, especially at my local northern backyard where it takes about one week before his current release are sold out.

His 2009 were present at the December-2011 tasting and it did extremely well. However the Mad About Wine dogma is about drinking bottles and not 1-2 glasses – so here is a “real” tasting note.

The 2009 are the most elegant “La Closerie Les Béguines” I have tasted so far. It might not posses the concentration of the ’08 or the nerve of the ’06, but it’s the most weightless of them. Rather approachable, but I don’t know if I would call it open, as no oxidation patters are apparent. I have always found the spices absolutely adorable with this Champagne - especially when young, they are sophisticated and racy. All togehter the notes are; sensorial sweetness, black cherries, oat flakes, pear, cornfield, almonds and sour dough. On the palate it floats beautifully, with this vivid weightless appeal, but also a devilish intense acidity.

My only complaint was a small membrane running across the Champagne, which I sometimes associate with dosage. I felt this membrane prevented me from getting a full soil bite. However – I rested 1/3 of the bottle and returned two hours later. Now this membrane had almost dissolved itself and you were able to sort of touch ground a have this splendid structured sandy soil bite.

I should mention that the Champagnes from Jérôme Prévost are a tribute to food, mainly driven from these refined spices and poised acidity. I had this with: Cod, beetroot, cherry, dill seeds and rye bread // Thin slices of stir-fried beef fillet, with pickled mushrooms, porcini mushroom cream, juniper salt and crunchy bread // Salmon Rillettes, plus a selection Italian hams. Everything went great. 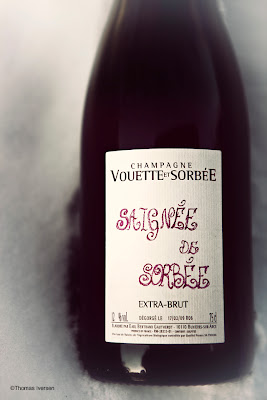 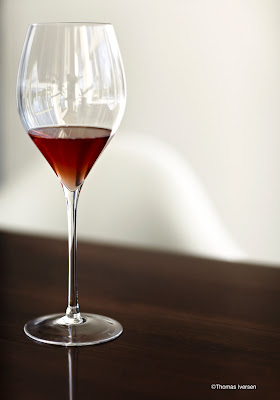 To determine whether you like a wine or not should not only be logical but also easy. This Champagne however challenged that statement. Over the 4 days I tasted it brought me through several phases where I was almost about to give up all hope of embrace and reciprocity.

On a Friday, when I happened to be home alone, I decided to open this always very distinctive rosé Champagne. Apparent that my experience would not be without problems, but that it should evolve in this way, I had not expected.

First impressions were not good. It blasts out of the glass, completely wanton, aggressive and not very appealing. Troublemaker is a beast of oak perfumes and cranberry associations linking to Campari and sherry notes. The taste is tannic, raw, sour and like biting into an iron rod. I drank probably 2-3 glasses like this and quickly decided that we were not meant to be this night.

The next day I tried again. The change is not overwhelming and yet – the oak is secondary, but the Campari and sherry notes are still here..hhhmm. Not particular eager to continue my journey I lost interest and returned maybe 20 minutes later. Aha!!!....something has happened and it's merely temperature, turning hatred to love. With warmth, the wine becomes sleeker, saltier and the fruits take on a more dried style. The cranberry notes are still here, but joined by chords of smoked meat, apricot, buckthorn and vanilla, which are the last perfumes from the oak. The taste is sleek, elegant and the tannic tones are now being replaced with this iron touch, which is also an essential part of the Champagnes structure. At this stage its dazzling Champagne. Overall it’s also food Champagne - requiring attention and immersion.

I saved even a little to day 3 - but felt asleep on the couch, so at day 4, I tried it again. It was still alive, even though the bubbles were now quite secondary. First impressions were the same hideous cranberry / Campari / Sherry notes = horrible. So: Rest and raise it in temperature… wait wait wait ... and we have delicious and seriously sophisticated Champagne with a very strong personality.

So eventually it became love – but remember to serve it around 14-16 degrees Celsius.