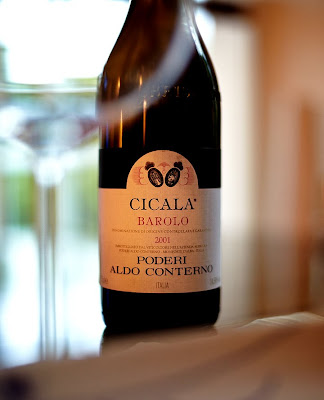 2001 "Cicala" from Aldo Conterno has been a hurricane since its release. I have had the pleasure of tasting it 4-5 times maybe and it has always been a favorite of mine. It might not be old-school Barolo enough for some with its incredible silky and fruits bomb, sweet cherry awarding appeal, but personally I have found it utterly irresistible. When I opened this bottle and decanted it in the big Riedel Ultra decanter I sensed some of the same young vibrant fruit and was already smiling. But at the table - in the glasses, it was a different wine. It's fairly alright on the nose - for sure it's settling down and going to a new phase (that would be expected) and the cherry notes is starting to become darker and the sweetness is in the background, but also at times almost absent. There is even the lovely violet smell, which I like a lot. The depth and complexity of the nose is however, not impressive - even if it's friendly. But man - I had a hard time with the taste. Painful structure and tannins - lots of bitterness, alcohol burning - not particular pleasing and simply killing the drinking pleasure. Closed - I could suspect so, but I am also concerned, that my palate is starting to suffer from all that bubbly stuff. My wife hated it btw - so the next day we had a Rosé Champagne - now that was a different story.