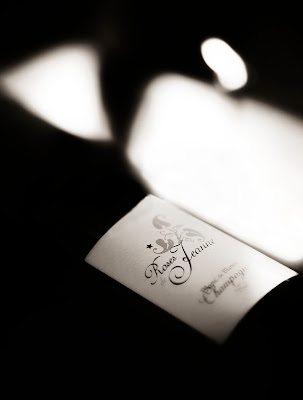 Tasting a Champagne made from 100% Pinot Blanc is of course rare – but it’s really the style of Cédric Bouchard, which always makes me re-think Champagne.

Cédric Bouchard is one not only redefining Champagne, but he is bending the wheel in such a way - that it’s not just about being different - but making something spectacular and something which will twist you own mind and palate. Even if his Champagnes aren’t new to me anymore, I always know, that things like the traditional aroma wheel is not valid on this planet and you always have too feel the Champagne more like a character – than a liquid which you can just dissect into small aromatic notes. I have to say, that the rising familiarity with his Champagnes – is not only a comfortable zone – it’s also a style, which I feel myself much more drawn to.

I had very high expectation towards 2006 La Bolorée as the 2005 vintage simply blew my mind. ’06 is much more reserved and it was really nice at first – but nothing more. The spices or should I say herbal character were dominating too much and simply ruining the balance as it overpowered the other notes. I took a small break for 20 minutes and just rested it in an ice bucket (not so much ice…you have to keep the serving temperature around 10-13 degrees). The wine had transformed into a small miracle. The purity is now able to shine, together with an enormous energetic fruit core. The herbs are now transformed into extremely refined spices, which goes into a pot of notes, which is not something you see everyday. I had to focus really hard and found small portions of; ginger, wet rocks, slate, hay, citrus, lime and mandarin peel. Even though I have listed 7 notes – I am not even sure they are “correct” – because it’s not how this works. The note “wet rocks” and “slate” is a way of me to describe a raw side of this Champagne and it’s a reminder how young this Champagne is – but also how much terroir character it has.

But we are not finished yet. You see – one of the other miracles of resting this Champagne was bringing out the vinous side. The bar pressure is already low (4.5 vs 6.0), but as the mousse settles down you sense the sleek and silky style even more, and this is a trademark of all the Champagnes of Cédric Bouchard. The taste is magnificent, but also very demanding. The spices and the bone-dry style are making a significant and raw impact and it’s not for those who seek their palate to be tickled with a velvet brush.

This is one of the most unique Champagnes there is and I adore it. However – I have to recommend cellaring for the 2006 vintage. 4-5 years seems like a good guess.

Thanks for another great post Thomas! I had this one too recently and found it to be very shut down. I do have a bottle of the 2005 which I have yet to try and remain excited about.

Thank you for chiming in.

For sure you are right by saying the wine is shut down. I found it reserved, but still think I got a brilliant glass of Champagne. Maybe I was just lucky – but as you can see I almost had two versions of this wine, after I let it breathe a bit. Having said that – I still recommended cellaring.

I also find it hard to say what’s shut down, closed or reserved, when it comes to a Champagne like this, as the track record is the debut release in the 2005 Vintage.

I only have a single bottle of the 2005 Vintage left, but have tasted it 3 times. That’s typical me – patience is not exactly my middle name. I have a few more ’06 – let’s see how long I can keep hands off. In general I find the 2006 Vintage in Champagne superior to the 2005 Vintage, but the ‘05s are more approachable.

Ps. I will taste another Cédric Bouchard in near future – the 2006 la Haute Lemblee.

Great note as always, Thomas.
Bouchard champagnes are definitely not wines for sample pours and one-glass-only tastings as they can develop absolutely madly in the glass. I've never had the 06 and only had the 05 once - it seemed surprisingly open and giving, so I'm planning on opening another one soon. On the other hand it will be exciting to see how these wines age, and despite the 05 being approachable now, I would say that given the sheer intensity, structure and acidic backbone, they will surely last for 15-20 years without problems - however, no sane person can leave something so delicious for that long. I just have to get some 06s, before they're all gone - if only my bank account would allow for me to buy enough bottles to be able to forget a handful for a decade or two.

Yes the 2005 La Bolorée was extremely giving – or so was my first bottle. My last encounter with it in March this year was a bit more muted.