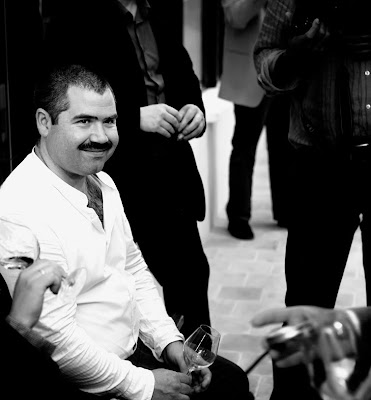 (Winemaker, toastmaster of the night and with the finest moustache north of equator; Benoît Tarlant)


All images are clickable and will open a larger format.
The day before the actual start of Terre et vins de Champagne, I had the privileged to take part in "Les ateliers Mets et Vins de Champagne", where each of the 18 producer presented a wine, with a matching 18-course standing tapas dinner. Behind these small mouthfuls of food, floating in a good solid tempo was no other than Château Les Crayères Philippe Mille and Dominique Giraudeau from Le Grand Cerf. Three sommeliers organized the wine/food pairing game; Philippe Jamesse of Les Crayères, Maxime Mantsch of Le Grand Cerf, and from my local backyard; Ulf Ringus (former Noma) from Relæ here in Copenhagen.
As you can imagine, after a 12-hour drive from Denmark - I needed a rest and Champagne with good food was a fairly good cure on a Sunday night. Below are my observations and despite giving some colour on food & wine, it should really be remembered as a joyful and relaxing event.
Menu: Wine (food) 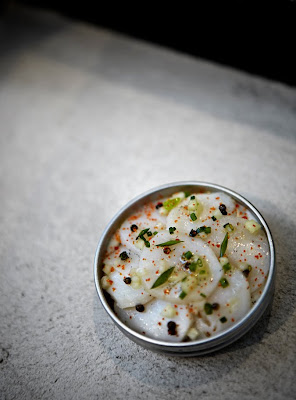 (Scallop/Vanilla)
1. 2004 David Léclapart "Amateur"; (Oyster/Seaweed)
Everything David has made in 2004 is pure magic and the Amateur is no exception. It has this raw chalkiness, combined with straw and grassy notes which makes it a beautiful linear and pure Champagne. Food: I am not an oyster fan, simply due to the texture, so I was happy to see a deep-fried specimen show up. However the oyster tonality was a bit too strong for my taste.
2. 1996 Pascal Doquet "Le Mesnil-sur-Oger"; (Oyster/Salmon/Caviar)
Food & wine was spot on here. And what a Champagne it was. Really refined with immensely friskiness, hay, slim chalkiness and sophisticated spices. Impressive stuff - bring me more
3. 2004 Laherte Frères; (Scallop/Vanilla)
A rather overripe and dense Champagne with components of vanilla and pineapple, which on paper should have been perfect to orchestra the food. However, despite the beautiful visual compositions in the small tin-boxes (see image), the sweet scallops and sweet vanilla aroma didn't have a sufficient counterpoint to balance the dish. It resulted in lack of subtleness; freshness and sadly the pairing didn't work.
4. 2005 Francis Boulard (magnum); (Lobster/Chocolate Tartlet)
So we continue to play with sweetness around classic raw ingredients. It's a tricky game, which challenge both mind and wine pairing. I liked the Champagnes raw and lime zesty appeal, but unfortunately there was a teasing note of pâté in the Champagne, which took away balance. The food wasn't a match made in heaven either, but the small bit was on it's own for sure tasty. 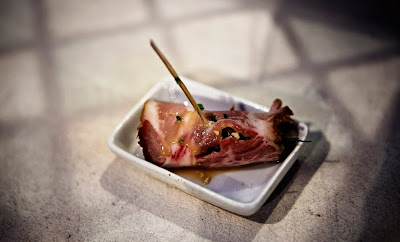 (Pork/Peanuts)
5. 1994, Tarlant Saga; (Pâté en Croûte)
This Champagne had a quit evolved nose of brownish apples, brioche with a solid touch of autolysis. The food came along just perfect, anchoring the full-bodied style of this Champagne. On the last meters, the Champagne drops a bit too soon, but still pretty well done on this vintage.
6. 2001 Hubert Paulet "Risleus"; (Pork/Peanuts)
The shift from Tarlant to Hubert Paulet was twisting things a bit up in my mind. I might have served them the other way round, but fair enough let's see what's happening here. This Champagne was like pure summer and sunshine. A very charming breed, which certainly could be of use, for the joyful days of life. However, if turning to a hard analytic approach, I found the Champagne too sweet for my palate and it didn't really match the food either.
7. 1996 Chartogne-Taillet; (Soy-sauce Duck/Sesame)
Again these shift in style - which always causes me to pause and use some time to level with the new wine. We are more old school again, with autolysis prints, but a devilish frisky acidity really lifted the Champagne, which underlines a trademark of the 1996 vintage. Food had Asian flirtations, which was easy for me to understand, as I have drunk a fair portion of food with Sushi and Asian dishes. Overall super pairing.
8. 1999 René Geoffroy Empreinte; (Foie Gras/Mango Jelly/Gingerbread)
Oh dear. My increasing appetite for Champagne is almost dropping the other way down, when it comes to foie gras. I need foie gras in small dozes and this bite wasn't bad, but not something I was ecstatic about either. The Champagne had a few dilemmas' to deal with. The sweetness paired fairly okay with the dish; however its structure suffered really hard with the fois gras, as I didn't seem to have the bite and acidity. 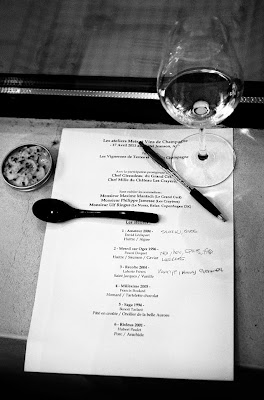 (The menu - page 1)
9. 1977 Pouillon & Fils Ecueil ; (Foie Gras/ Cereal)
I think only a Sauternes could have matched the food - which had the same viscosity as a chocolate mousse. Here the foie gras violated my limit of what I can take and it wasn't good. The Champagne was an entire different matter - what a stunner in such a difficult vintage. Perfectly mature with fresh appealing notes of newly washed sheets and mango. A bit of cheese flavours also came forward, which took it a notch down, but overall couldn't spoil the fun. Great!
10. 1982 Agrapart & Fils Minéral (magnum); (Morel/Poultry)
Magnums and Champagne is sometimes times two in size and quality. To think of it, I have never tasted a Champagne in magnum, which has disappointed me. This is no exception, even though it took some time for it to open up. At first rather shy, like the flavours was lying in a mist. You sensed that we are talking mature Champagne and slowly rose to the occasion with immensely freshness and frisky acidity. When the food was served it was like - yes....of course. Combo of something with funky forest flavours and light fresh poultry meat, melted together with perfect dosage of 2 g/l. So far the best marriage of food and wine.
11. 1998 Françoise Bedel "Comme Autrefois" ; (Morels)
More morels - I like, which proved to be a solid pairing with "Bedel". In fact, when I think of it, it might be a good lesson to give more focus on such pairing with the Champagnes of Françoise Bedel, as they often lean towards a rather funky biodynamic style of deeper layered fruit. Those notes showed perfectly here and had companionship of moist hay - and despite the Champagne lacking a bit in intensity (I think it's the vintage) - I was overall happy.
12. 2006, Bérèche & Fils Le Cran Rosé 2006 (magnum); (Farm Pigeon/Foie Gras/Blackcurrant).
I have heard stories about this magnum, which is only produces in 30 ridiculous bottles. Here it was. One of my absolute favourite rosé Champagnes and as it would be impossible to steal a bottle and escape the crime scene, I had to settle with a glass (maybe I had two - maybe even three, but don't tell anyone). It's sooooo outrageously good - WOW man, I am flying. Food - well for some odd reason I happen to like pigeon, which has the tendency to split people's minds. I really liked the dish and I didn't even notice the foie gras. I guess I was under the spell of Raphäel's rosé. 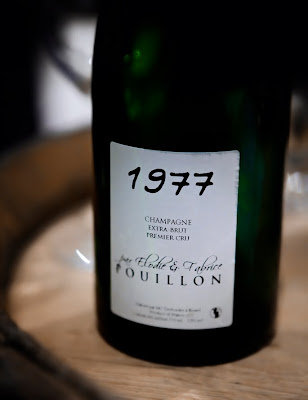 1977 Pouillon & Fils Ecueil
13. 2003 Olivier Horiot Rosé des Riceys En Valingrain; (Duck with Morello Cherries)
So let's not forget that they actually produce still wines in Champagne. Here is a beautiful red specimen, of that perfect fragile salty red and smoky fruit. The Champagne even had beautiful kirsch flavours, which went like a glove with food. Lovely.
14. 2004 Benoît Lahaye "Bouzy Rouge"; (Tabbouleh/Beef)
More red wine, but a different style than Horiot. We are still in Champagne, so still a delicate wine, but a more fruity style - which was rather pleasing. Food was a tartar and I didn't really understand the match?
15. 2000 Franck Pascal; (Apple/Caramel)
So we swift back to Champagne again and enter the dessert section. I can understand why it's logical to do it like this, but it's a disaster when it comes to pairing food and wine. The Champagne seemed fair, but ordinary with simple straw aromas. But then again - having sweetness of the apples sticking to your palate made it really hard to judge it properly. 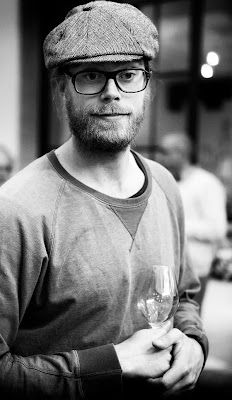 (Ulf Ringus)
16. Goutorbe & Fils Demi-Sec; (Roasted Pineapple)
Despite being in the demi-sec section, I noticed a component of sulphur here, which made it hard for me to continue the journey. Maybe I am overly allergic to this note, but that was my reaction. The roasted pineapple mouthful was a bit simple, but really tasty.
17. 2000 Jeaunaux-Robin Cuvée An; (Cappuccino by Fossati)
Sadly the Champagne was corked. I had a chance to taste another bottle, but that was corked too. I am not a coffee drinker, but the Cappuccino tapas were rather nice.
18. Couche Bulles de Miel; (Shortbread/Pear)
Although I am not a fan of sweet Champagnes (this has 40 g/l of sugar), this is one of the better demi-sec, which I remember doing well with a dessert dish @ restaurant Noma last year. Noma's desserts aren't that sweet, which wasn't the case here and sadly it didn't end in the perfect marriage. 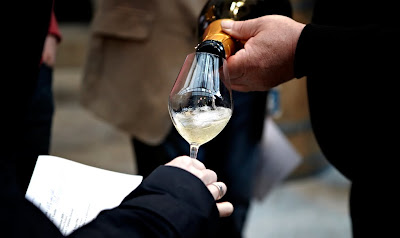 (2005 Francis Boulard (magnum))
What a way to start this event. A good night's sleep and we were ready for more Champagnes the next day.
Stay tuned for more
Indsendt af Thomas kl. 8:51 PM