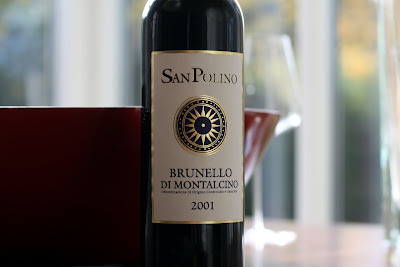 (Tasted over two days – initially not decanted, but gave it a couple of hours to open it up; Glass(es) various – no difference)

This wine is like a big hope. It starts of with a shy nose of dust, black fruits and herbs. These herbs are not fresh, but a bit rough, like dried thyme. The taste is lacking in depth and especially in fruit – which is not good at all. There where moments just after filling the next glass, where fractions of something called fruit came forward, but it quickly evaporated. “Give me some love” – “Show me the money” or at least “Give me some hope” - but nothing came. The wine curls nicely around the tongue and has in that perspective some sort of Sangiovese trade mark, but the level of fruit and the overall quality is by far not approved. It’s worth mentioning that San Polino blew me when I first taste it, just after its release. It’s certainly possible that I might have caught the wine is a sleeping phase, even if I remained concerned with some of its characteristics. Time will tell – that’s the beauty of wine.
19/10-2008
Indsendt af Thomas kl. 2:32 PM

Thomas, I see you're enjoying your new camera and lens. So do I ;-) Your photos are fabulous!

The photo on your blog header - when wine glasses become art.

So glad to see your blog is not on pause any more - your stuff is the benchmark!

Thank you very much for those kind words.

Yes I love the camera and especially the little Macro lens, which you guided me to buy, thank you. I don’t have the newest version of Photoshop, but I have bought the software; Noise Ninja, which is great for the pictures with very little light – also inspired from your camera guide.

I have the feeling, that this camera hobby will evolve – I have just sent an e-mail to old friend, who is best friends with one of best food photographers in the world, and I have the feeling that the advices that I am seeking might ruin me ;-).

Yes the blog is active now – I have given up the idea of copying all of my old Tasting notes and simply start from scratch.

PS. I remembered to book El Bulli for the 5th year in row (fingers crossed again) – thank you for remembering me, I just made it by a 30 minutes margin.

There's one thing I have been pondering about, Thomas. I'm sure you have tasted some wines of Danish produce - I'd love to hear about your experience and opinion, please?

I have never tried any yet but have heard that Herman's Vinotek might have one or two that I could pop in and try one day. Maybe I will.

About El Bulli - all of sudden I remembered an old discussion of how to get a table there, which made me post the note. A bit late, though. Did you know that many people send 10-20 mails through friends and family? I know I didn't. I wouldn't give the world to dine there even though I want it badly.

Hi Trine – I have tasted the Danish wine called “Nordlund” 3 times. From what I know – Nordlund is the best red wine produced in Denmark. You might have heard the story, where Mette Fugle reported from Piemonte in Italy, that Denmark had won the price for best wine in the world. Maybe a bit exaggerated, but Nordlund certainly made headlines ;-).

I have tasted the wine 3 times, once at Noma, once at Premisse and once at home. It’s for sure a well made wine and surprisingly alright. Reminds me of crossing between a Barbera and a German Spätburgunder. But as you can see from the tasting note below (from Premisse) – I blind guessed to be from the south of France. The price tag on Nordlund is rather high though, but why not try it - just once.

I have also tasted the Danish “Dons”, which comes from Kolling and it’s a sparkling wine – how wicked is that ;-). It’s a funny wine – not bad, but has a very perfumed smell. The mousse breaks like soap, and it the taste is extremely short. I should be noted that I tasted “Dons” with some bottle age – and I think Dons should be drunk instantly after release.

Anyway – here is the TN on Nordlund from Premisse, back in 2006

The sommelier Christian Aarø decided to tease us a bit and served this. We where no where near guessing it. Some where in Spain and I was in south France. Black berries floral sweetness and rather nice in fact. It has a good portion of warmth and maybe not that complex, but defiantly not hopeless, just after a Bordeaux flight. Taste has dark berries good fruitiness and medium body. A bit missing on the complexity scale but what a nice surprise. (85)

I have no doubt that people would do whatever it takes, to get a table @ El Bulli. I have heard that they do some sort of data work of all the reservations they get, in order to prevent a table at El Bulli being offered at EBay. One of my best friends got a table there a couple of years ago – I am now using the same technique as he did, which is a very simple e-mail with specific date and time + not on a Friday and for only two people. It will probably not work, anyway ;-).

Thank you for such fast feedback.

Considering it's a Dish wine your note is describing I would say it's quite positive :D the 2003 Nordlund. Now I'm even more intruiged. I'll try to get hold of it - by a glass or bottle!

Back to the subject of Bulli. Yeah, I immediately regretted not to whish any date instead for a weekend day. Oh well, now I know what to do for next year, anyway. :-)

About El Bulli – it’s all guessing if such a tactic would work – I guess both our chances are pretty low.

Let me know when you get a reply.

Keep fingers crosed for you...

Typical - if only they knew who how much you would appreciate a yes ;-).

I haven't heard anything yet, but I don't check my private e-mail that often.