Let's start with something that I almost "promised" to write about - our dining experiences in Champagne. I will make it short. We had a swift and screaming cheap lunch @ Tout en Bulles in Epernay. We drank Selosse Initiale - which unfortunately was served too warm in my opinion. Anyway - food was simple and tasty. I must highly recommend this place.

The same night we stayed @ La Briqueterie and took the easy choice of also having dinner there. We started with a not so tasty glass of some NV Pol Roger stuff. The wine list was rather limited to big house names, but we found a 2000 Fleur de Passion from Diebolt-Vallois which was rather nice (not great), but showing good bottle evolvement. For red wine we picked the 2005 Les Fortes de Latour, which was so soulless with its boring, indifferent jammy blackcurrant fruit core. The food was indeed a disappointment. Maybe I am just too spoiled from Copenhagen's restaurant scene, because this was for sure the most disappointing * Michelin restaurant I have ever tried.

With that in mind for the next day, we sat down in the pompous dining room @ Château Les Crayères in Reims. Under normal circumstances I am not in favor of these types of restaurants, which almost have a Royal feel and tend to be rather snobby. But luckily the former *** Michelin (now **) prevailed and we had a really nice dinner there with classic vibrant French cuisine, top class atmosphere and good service. The wines we had where of course aimed on Champagne, with the exception of a rather tasty 1999 Côte Rôtie from Jamet. Champagne wise - I remember a crystal clear and flowery 2002 "Venus" from Agrapart, which now is showing incredible razor sharp lines and elegancy. We also had the always majestic 2003 L'Apótre from David Léclapart. The wine list or should we call it a book, is rather fair priced and has a good selection of Grower Champagnes. I guess it's almost a must to try this legendary restaurant just once, if in Champagne. 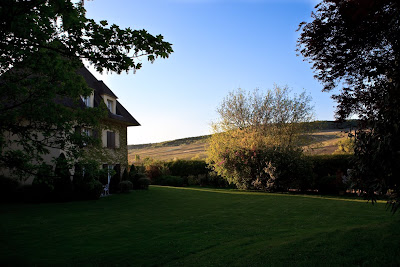 Champagne wise I have drunk the Brut nature from Laherte a couple of times. Really easy, fresh, citrus style offering. The Extra Brut Réserve from Bérèche was also one of the Champagnes I drunk in May and it always makes me smile.

I had the 2004 “La Plantey de Chassey” from Derain (again). Once again proved immensely clean (No sulplur) and with it’s divine pure red berry fruit it really makes me smile.

What else - well let's see? I had two German GG Rieslings from Diel in Nahe. Both from the 2005 vintage, but indeed very different in style. The razor sharp "Pittermänchen" - which was brilliant, with its precise focus and Diels always oily richness. Actually I found it rather open - not that it can go further, but definitely a pleasure to drink now. In contrast was the GG "Goldloch" - clumsy, out of focus and an unbalanced note of brown sugar and acacia honey. Maybe too young? On one of the best weather days in May - we ended up drinking the 2001 Cepparello from Isole e Olena. What a sexy beast - with dark cherries, velvet fruit core and utterly charming style. It's so smooth on the palate, but prevails from being fresh and cool tempered at the end. It's one of those wines you can just drink without thinking too much. I really loved it.

Otherwise, my very good friend, Anders held a great get-together @ Famo 51. The food was incredible good on this Friday, where FAMO only serves fish. It should be noted most of the wines suffered from being served a fraction too warm in the cozy cellar surroundings. Unfortunately my only glass of 1999 Bollinger GA was corked. The other Champagne of the night was the 1999 Belle Epoque, which lacked in nerve and backbone structure. For sure it's made in an elegant style, but I simply can't accept its rather annoying mousse which breaks without any life what so ever. The other wines this evening was; 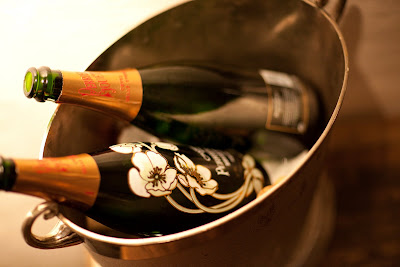 2005 SQN Rosé: More like red wine and very aggressive with its staggering 15.8% alcohol and oak perfumes. It should be noted, that it should benefit from cellaring, but damn it was not good.

More cool tempered was the 2005 Pax Rosé - but then again, not particular interesting.

Despite the fish theme Anders had sneaked in an incredible dish of Bistecca Fiorentina. With that he served a number of red wines; The 1997 Barbera "Ai Suma" from Baida - smooth as a velvet glove, blackberries, vanilla, coconut and doing really well with the meat. 1997 Solaia - a big disappointment, lacked structure and acidity, seemed tired this night. 2004 Percarlo, big bold wine, with liqueur and black cherries. 2004 might be a great year, but I am missing the red fruit here. It might come - but the wine is really in need of cellaring. 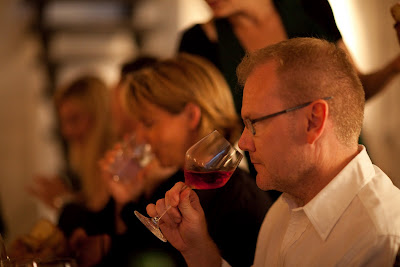 I think that was it - cheers

If you had shown up on time at Famo, you would have gotten a glass of 99 Bolly GA from the first bottle which wasn't corked. :-) It showed well. Belle Epoque was dull.

I agree with regards to La Briqueterie.. the food was lousy. Les Crayeres was very good classic french but actually unexciting.

The best meal of the trip was IMO lunch outside Avize with a view of the valley :-)

He he, Dan….bummer about the 1999 GA. But I have tasted a perfect bottle a few times though.

Les Crayeres – yes dead classy. But I actually liked it a lot. The petit fours was however horrible.

Agree – great spot Mads found in Avize. Remember the Béreché Champagne stopper that took of in rocket speed? Champagne can be dangerous hobby.