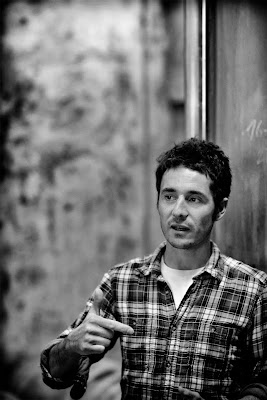 A visit to Cédric Bouchard.

I have always been drawn and fascinated by people who have the ability to think out of the box. It’s the result of two things. First – I hate flock mentality, which I have been dealing with the last 19 years in the financial markets. Secondly – I have a soft spot for the rare and those who takes things to the limit. I am feeling alive when that happens. However it’s not necessarily the road to success, but in it’s path I always see the opportunity to learn something. When it comes to wine I find it almost crucial to see wine as a challenge, as I like the thought of staying alert and curious, despite I know I am getting older and patterns have started to form.

Cédric Bouchard challenged me for the first time in May 2008 when I tasted the 2005 Les Ursules. I found it fascinating more than I really was ecstatic about it. But there was something there – like the first time you listen to an album and it’s all a big mess, but slowly it grows on you and after a while everything falls in place and suddenly you only hear shear beauty.

Cédric Bouchard has also challenged my belief of what Champagne is and maybe I was a sitting duck for that dilemma, but fact is – today I see Champagne offering far greater spectrum and funny enough he ranks among my favourite producers. All of his Champagnes are true gems with fascinating profiles; strong personalities and Champagne would be a poorer place without him. 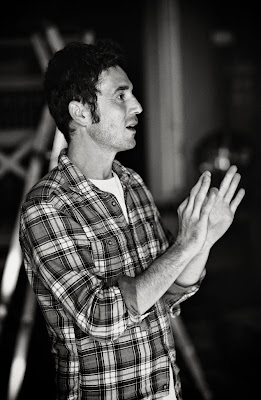 For some odd reason, during my early days as a Champagne interested person, I never considered the Aube region of Champagne to be taken serious. In fact, when I first heard about “Aube” I had to examine a bit closer, to really understand where and what? Today, I think very few Champagne lovers will still refer to Aube as the “The Ugly Duckling of Champagne”. The swan transformation has indeed occurred and producers like eg. Vouette et Sorbée, Olivier Horiot, Marie-Courtin, Demarne-Frison and of course Cédric Bouchard are producing Champagnes which has changed and diversified the Champagne landscape even more.

Still, with my very limited knowledge, I consider Aube to be rather different. There is something urban – something Jurassic about the soil feel in some of these wines, which is truly inspirational and fascinating. In some areas of Aube you have historic proof of nature biting back with formations of chalk which is 100 millions years older than those you will find in Côte de Blanc. Even the villages here are different. Older – more middle age and you will find no polished facades or avenues with flower settings.

On my way to Celles-sur-Ource, where Cédric resides, I passed a white car – “That was him”, I shouted to my friend in the car. And yes…it was him. He pulled us over when we entered his hometown, as he also recognized my big Danish head and took us up to his place. 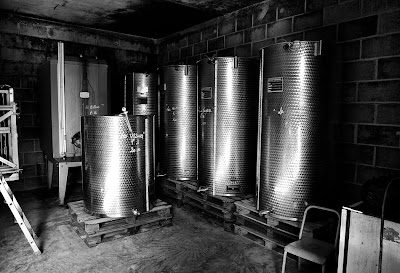 The dogma of Cédric Bouchard is; one grape, one harvest and one parcel. “Blending doesn’t interest me, he says”. His yields are also ridiculous low. “I only want the best and even if a vintage from a parcel is good, but not the best – I will not make it". He practices sort of natural viticulture, but he is not certified organic or biodynamic, as he doesn’t like to be following specified methods. Nor does he like to be defined to belong in a certain category. He is also realistic and with so little land at his disposal, loosing a vintage due to dogmatic methods could bankrupt him. “I have only sprayed with chemicals once and hope I will never have to do it again, he says”.

Dosage would be like writing his own dead wish – it will never happen. Dosage is associated with Champagne and the more you get to know this guy, you begin to understand that he doesn’t really want to be associated with Champagnes paradoxes of mass production, glamour and whatever could be interpreted as “classic Champagne”. He even suppress the bar pressure to about 4.5 atmosphere (normal is roughly 6) as he in general don’t like bubbles, but also to bring forward the vinous side of his Champagnes.

All his Champagnes are made in steel, but as he is off curious nature and still sees himself on an experimental level he has an experiment going on in oak. The experiment is Coteaux Champenois – both white and red. The white comes from Chardonnay row in the Le Creux d’Enfer vinyard and the red is from the same vineyard and Les Ursules, just Pinot Noir. He is still sceptical about wood. “Steel will always bring more purity to the wines and I will always prefer steel for my wines”…but he continues, “Oak does something to the wine, which I find interesting and I want to learn more”. The two Coteaux Champenois will only be released in magnums in a ridiculous low number of 146 bottles, starting with the 2007 white and 2008 red. 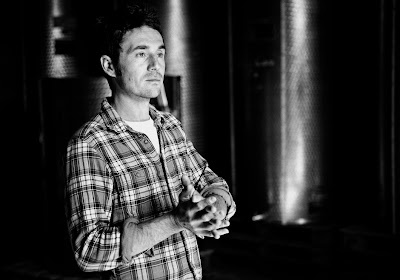 In his cellar - Cédric had lined up 6 bottles for us to taste.

We kicked off with 2008 Inflorescence, which is a 1.49ha Pinot Noir plot called “Val Vilaine” in the village of Polisy . The Vineyard belongs to his Father, which he also shares cellar with, but it’s Cédric who makes the wine. In fact it was also his father, which kicked off his entrance to winemaking by giving him a go with the Les Ursules vineyard back in 2000. But despite family blood and sharing cellar, their philosophies about Champagne making and general relationship are in complete and colliding contrast. Their relationship is constant key to frustration for Cédric and it’s obvious they can’t continue making Champagne under the same roof. Cédric hopes he can obtain a cellar up for sale in a nearby village, which will give him a fresh start and the opportunity to expand a bit. I doubt you will see him produce a lot more bottles, unless he obtains more land, but from 2014 he will have the space to label all of his wines, except “Inflorescence” as official vintage Champagnes. But he is also planning releasing a cheaper Champagne than “Inflorescence”, as he wants his wines to be for everyone to enjoy. In fact when asking about his sudden cult status, he is very aware of keeping his prices fair, so they can be enjoyed by real wine lovers, he says. Again – it’s the same pattern; he doesn’t want anything to do with the “dark side of Champagne”. Who can blame him?

The 2008 Inflorescence was by the way splendid – with divine ripe and pleasurable forward fruit and it’ the best vintage I have taste so far. Already at this entry level you get a sense of what the Cédric Bouchard fuss is all about. You can find a more detailed note here. 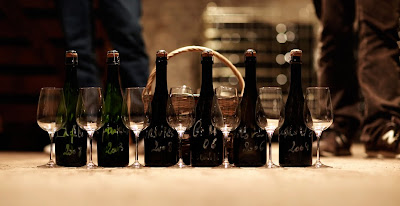 Next up was 2003 La Parcelle. I have only read about this cuvée until now and it’s again Pinot Noir from a 0.73ha parcel called “Côte de Bechalin”. This Champagne is not made by Cédric, but by a close friend of which Cédric bought the vineyard in 2007. This 2003 Vintage is also the final release of this cuvée. But it’s great Champagne and despite being from the opulent 2003 vintage, you have great red fruit and that sleek texture.

I have really looked forward to taste 2008 Les Ursules, which was next. We are still in Pinot Noir land – 0,9721ha and this vineyard are located in Celles-sur-Ource and the wine, which initially formed the making of the house “Roses de Jeanne”. Les Ursules is from release always a bit more backward, compact and more structured than Inflorescence. It posses greater layers of complexity and I tell you the 2008 vintage is more than good. I am totally in love with those black cherries and currant perfumes. 2008 Les Ursules is more of everything and despite it has plenty of cellar potential you have to try it now. 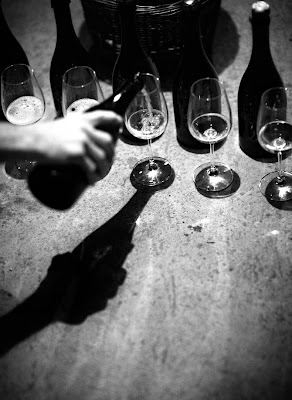 The next Champagne was the 2006 La Haute-Lamblée (100% Chardonnay). It’s a tiny tiny plot 0,071 ha with very young vines planted in 2002. Amazing so young wines can produce this kind of quality. I have tasted the 2006 once before in Berlin Sep-2010 and I found it absolutely adorable. But back then – I considered it to be rather transparent with its lush, ripe and yellow fruits. Now – it’s contracting a bit, showing more young Chablis like character with the minerality really biting back. It’s giving more structure even if we are still dealing with this sleek type of Champagne.

Already now, after 4 Champagnes, I was thinking, “This is heaven”, despite we are in a cold dark cellar. However more was to come. Next was 2006 La Bolorée (100% Pinot Blanc). La Bolorée (0,2107 ha) was one of 3 parcels for sale, but Cédric was far from the only interested buyer. So what to do? They drew lots and Cédric won La Bolorée. He was not at all happy about his award. “I took up a spade and dug a hole in the ground to see what I had obtained”. He encountered a south exposure vineyard with old Pinot Blanc planted in 1960 with soil on chalk. He now smiled and now knew he had obtained something beyond the ordinary, because La Bolorée is the only vineyard from Cedric solely on chalk where the other Champagnes are on argilo-calcaire soil. “The soil of La Bolorée is something else he says…and he continues “I see my Champagnes as small individuals personalities, just like people and this is what I want to bring forward”. La Bolorée are indeed a Champagne with a strong personality and maybe his most demanding Champagne. The 2006 are far shyer than the 2005 debut vintage. Incredible compact Champagne with a strong herbal touch it’s not easy Champagne to understand. It twists your mind and takes Champagne to the limit – but it’s also holding your attention and slowly making you understand as the herbal notes transform into sophisticated notes of ginger, wet rocks and hay. Personal, I can’t get enough of this Cuvée and I think it’s the one with the best cellar potential.

Just before I headed to Champagne I tasted the 2004 Le Creux d’Enfer rosé. Here it was again – one of the 475bottles made. You can read a more detailed note here, but I can confirm that this bottle was breathtaking as well 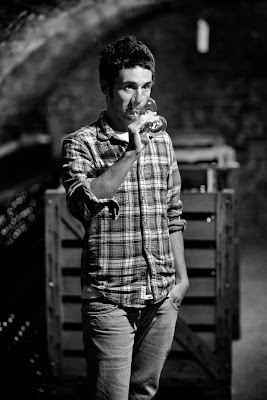 So that was it. Cédirc Bouchard more than fulfilled my expectations. He is truly fascinating with a strong passion in his heart and producing some of Champagnes most significant wines.
Indsendt af Thomas kl. 10:43 PM

I'm planning to visit Champagne in late October for the first time. Is it a good time to visit? And may I know how to visit the Champagne growers? How do you make your appointments to visit them? Or do you have an organizer to help you out? Thanks

October sounds like a good time to visit, as the harvests are done and in house.

It depends how I organize a visit. Here in Denmark very few retailers import most of the interesting growers, so I often organize through them. But since I have established contact with the growers more than once, I now just contact them direct.

Some growers are however always short of time, as they do everything by themselves and simply don’t have the time to take care of visits. But my advice is to always give it a try.

Have a fantastic trip.

Thanks for your info. Greatly appreciated.