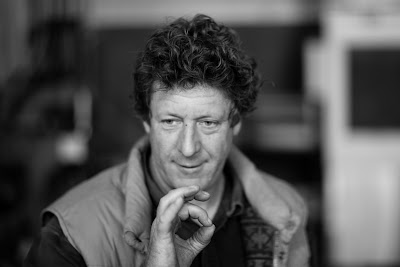 The very last stop on our Champagne trip was with Anselme Selosse in Avize.

I guess I where no different than many other wine lowers, than to be familiar with the wines from Jacques Selosse as an alternative to the big Champagne producers, when I first tasted his Champagnes back in the mid-nineties . Already at that time possessing exceptional quality and very fair priced. Since then - much has happened and Anselme has gained cult status in the Champagne region and unfortunately prices have followed.

My ability to speak and understand the French language is unfortunately non-existent. I was one of those who chose the math-line in School, as I already knew, by the age of 10, that I was (like my father) going to work in a Bank. Luckily our little group, already knew that Anselme where going to speak in French (and fast), so we have brought our own interpreter (and Champagne expert aka, Mads Rudolf) to help us. 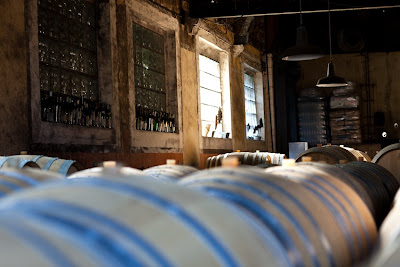 Selosse's facilities are a big room - almost looks like a big warehouse - just with lots of small oak barrels. Even though the room one some points are like a production hall and messy, it's also rather beautiful - with lights pouring in from the windows it gives the room an almost healing calmness.

Anselme is passionate about his work and it's clear that besides making damn good wines, he is still a strong voice for those who believe in bringing "natural" wines to the world. I remember one of the attendees to this visit (we were not alone - about 13 people was here) asked him if he could point out the vineyards - just roughly where some of them where located. "Just follow the weeds - Anselme replied"
His pioneer role, has since his breakthrough wine - the 1986 Vintage (more on that later), been not only an alternative to the rather conservative Champagne scene, but also an inspirational source for many of the new and young generation, which these days are flowering like never before. The good thing about Anselme is that he always is up to something, as it seems like his mission to tease, provoke and simple turn things upside/down in order to keep showing different terroir expressions and most importantly his formula of showing it. 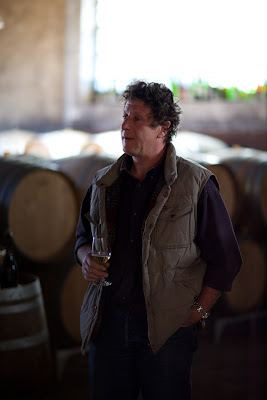 Anselme seemed to be in a very good mood and he generously poured us some various Vins Clairs from the 2008 vintage. Once again - razor sharp definition and the material seems of incredible high quality. After that we went below to the cellars which was lot bigger than I would have thought. On second thought, Anselme in general blends 3 vintages in a NV release and keeps the wines 3 years on its lees - so it requires some space. Anselme took a 1999 Vintage (yes) and a Rosé and said - "Pick a year". All where quiet - but Mads said - "1986". I don't know exactly what Anselme said to Mads - but clearly Mads had to explain himself for picking out such a rare and prestige wine. They exchanged very few words and Anselme just walked straight out and I think we all thought - No 1986 today. But then he stopped - and just before us, where a box of 1986's. He told Mads - Look how few bottles there are left...then paused...and took a bottle - YES!!!!! - thank you, Mads.
He disgorged it on sight and we started pouring this legendary wine. Uhhh - what a nose - exotic for sure, but still holding a good proportion of apple and exotic juices, but its age is also pronounced with an oozing note of truffles. Taste is rich - fresh and rather nice if you ask me.
Hard to follow such a wine - and when sticking your nose into the 1999 Vintage, you needed just a few seconds to re-address and clear the taste buds. Of course very different Champagne - energizing apple, citrus, butter fruit and immensely concentrated stuff. I have read that it's holding close to 14% alcohol - which I can't confirm - only teld you that it's really wild.
The Rosé was next - seems better now. Still a charming teddy-bear Rosé, but the now lower dosage (from 7 >> 4g/l) takes some of the sweet biscuit notes a fraction down, gives more edge and presents a more balanced Champagne. 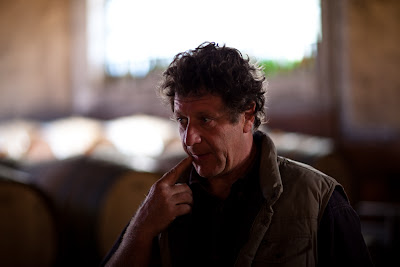 But it wasn't over yet. A new wine was next. I am simply not able to offer you the correct details on this wine, but I can assure you, that it has very little to do with bubbly Champagne. A dark liquid hits the glasses, sweet fortified stuff - sherry character and Selosse goes outside, where has two barriques standing - directly in the sun with the next vintage of this stuff. I guess Anselme still likes to have fun and has a small Sherry-man in his belly. Anyway - interesting stuff.

A great visit - I have to learn some French.
Indsendt af Thomas kl. 8:44 PM

My sincerest apologies for that '86. MR

I forgive you, Mads.

Fantastic to taste something like the 86 especially when most of the bottles, you usually taste are a lot younger. I really liked the 99 & the rose as well.

“although his English abilities seemed to improve a lot when we wanted to buy some bottles :-)”

Wow, what a tasting! Any tips on getting appointments here? I've been begging for bottles of Selosse here and there for years now. Going to champagne at the end of the month for two days - would love to get a tasting with Anselme. Not in the trade, more of a professional drinker...

Thank you so much for your kind words.

I had a lot of help to arrange my Champagne trip, as I don’t speak any French at all. With Anselme its particular important that you can speak some French. We had a good friend with us at the visit, who translated for us.

Btw – you can look forward to an upcoming Selosse report, as I am attending a Selosse "10-years Vintage Vertical" on the 4th of September.