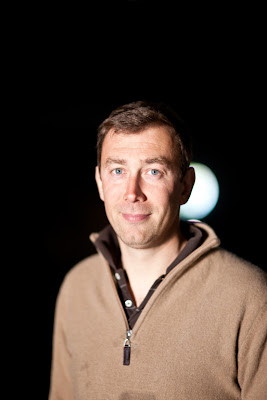 The first stop @ day 2, was Ulysse Collin in Congy. Once again a young man greats us - the very friendly Olivier Collin, which now makes wines, from the some of 9 hectares of vineyards in the Collin belongings. The Collin family has never themselves made wine, but rented the vineyards to Pommery. However, it was always a dream for the law-student Olivier to make his own wine and to study winemaking he took a year of a stagiaire with Anselme Selosse. That year changed his life and when I asked him about it, he describe it much as a before and after life.

Only one wine is currently available from Ulysse Collin - a Blanc de Blanc which comes from a small 1.2 hectare parcel called Le Perrières. But later, Olivier will release another wine from the estate - a Pinot Noir Champagne (more on that later). I am not sure how large the production will go, but it has gradually increased since the first vintage (2004) as Olivier obtains more land with the drop-out of these old lease contracts. 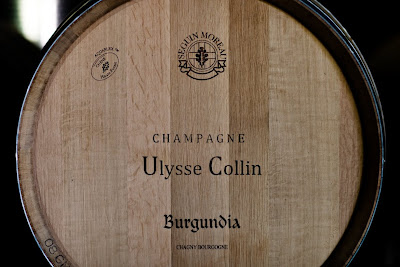 The first visible sight at the estate was the barriques. Clearly a sign of the Selosse inspiration. Others can correct me here if I am wrong, but it seemed to me, that Olivier really wants to take the step to biodynamic winegrowing. As he said - "there are risk involved in biodynamic winegrowing", but he admires those who succeeds with it. 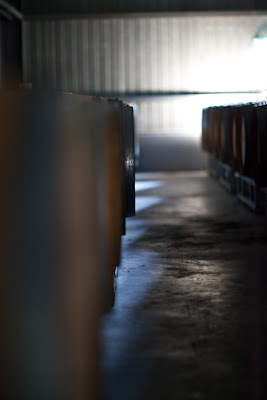 We tasted several vins clairs with Olivier – both from traditional oak and barriques - also first and second press from the various parcels - all from the very promising 2008 vintage. Very very interesting, once again. Here we also saw the first glints of the upcoming Pinot Noir - which already in vins clairs version was rather interesting (very conservative stated ;-) ).

Later we tasted the real deal - the 2006 Blanc de Blanc. Really nice - touch of vanilla from the oak, flowers, citrus, well balance and has the right level of fragileness to keep it interesting and elegant (btw - it's without dosage). It seemed a little better defined than the current 2005 and I will for sure pick-up the 2006, when it hits the market sometime in early 2010. 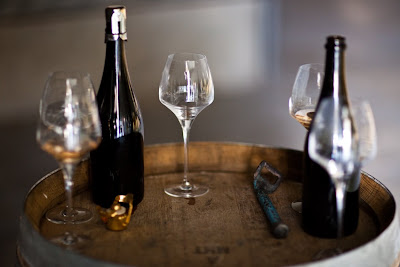 The Pinot Noir - well well...shall I really tell you about it, or buy the whole Danish allocation for myself ;-)? It's good - really good....no...what the hell - it's fantastic. Still possessing some of its pinky color it holds a natural 13.7% alcohol. Olivier told us, that he had some problems getting the wine approved for its high alcohol and secondly as an Extra Brut. But as he said, he just waited and waited for the grapes to be perfect. Perfection is not always about simple maturity, but the right levels of phenols are also crucial. It’s the kind of wine where you stick your nose in and immediately you are in love. Indeed charming, with raspberries, redcurrant, apricot and vanilla. It was almost too good, if you understand? I speculated (just for a second or two) if it was the kind of wine which actually could be a little too much of everything and turn out monotonous, if to have a date with a full bottle. But no - I will have to say, despite its almost sensual healing appeal. It's truly one of the sexiest Champagnes I have ever tasted. And please, Olivier - keep the natural, slightly pink color please, when it's released in early 2010.

Yes it was an interesting visit to Colin. His BdB is very good IMO. Regarding the vins clair we tasted the new vintage from both oak & acacia. I'm no expert on tasting vins clair but they certainly had lot of character.

On biodynamique I remember him saying that the wanted to pursue that course but he was worried about the humidity and mildew that can cause problems for the grapes in Champagne. I can't remember if he said that he wanted to go 100% bio like Leclapart or if he preferred a middle way. I personally don't care as long as the wine taste good :-)

Once again the vins clair tasting was interesting. Significant differently profiles and fascinating stuff to taste.

Yes I think you are right about the way he talked about the biodynamic approach. He knew that we where going to visit David Léclapart next and gave him thumbs up for his philosophy. I guess, as Olivier will gain more knowledge, he might also take more risk. But for now – I am also quiet happy with the outcome no matter what category he belongs in.

So what is Mr. Posh - Dan-the-man-Samsøe drinking tonight?

Well – I have an open mind a Taittinger for sure makes good wines. I remember tasting the 1996 Rosé at Anders’ 40-years at Luns….you where there also....you sat beside a totally babe (my wife)….remember ;-). Anyway the wine was nice too. Looking forward to hear about the 2003 – heard mixed things about it.

I am drinking Champagne tonight – no doubt about that. Have visited a small wine shop @ Østerbro today (think you know it).….I mean why stare into 4 computers screens when you can take your bike, have some fresh air and visit good friends and drink wine.

Yes I remember Signe. She is very nice. Say hello to her :-)

The CdC rose was good IMO. An elegant and refined champagne. Great nose of balanced perfumed dark red berries. The mousse was great and plenty of small bubbles to go around. I still have some left in the bottle and I will drink the rest tonight. Clearly a different wine than Selosse Rose and also a step above in quality in my opinion.

PS: Have you used your champagne stoppers?? One of mine has already fallen apart.... piece of c....

Great photos! I'm enjoying these posts. Sounds like you had a great trip.

I am not a huge fan of the Rosé from Selosse either. However, I think he in general has improved its quality with the now slightly lower dosage.

I will post a note on Vilmart later and a very interesting Champagne I had yesterday (which Peter doesn’t even know about – or does he? ;-) )

Peter – thank you so much for your positive comment – means a lot to me.