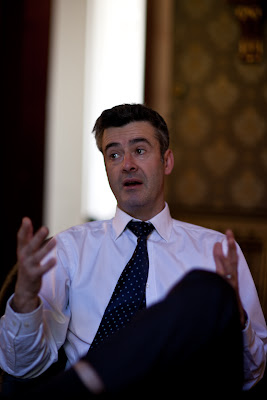 Obvious there where a rather big contrast from our first visit to small producer Laherte Fréres to big house @ Deutz, which was our next stop.

We where greeted by director Jean-Marc Lallier of the Deutz family at the beautiful house in the center of Aÿ. After we had had coffee we took a small stroll in the gardens which lead to the production hall and cellars. I didn't actually know this, but Deutz uses no oak at all - only stainless steel tanks. I would have thought that the impressive Rosé Cuvée William Deutz saw some oak, but no - the philosophy is to make elegant wines and keep the traditions.
The cellars were an impressive historical site. Like a big underground maze with about 2.1 km of small paths. Not the worst place to get lost as 8 million bottles are lying there. 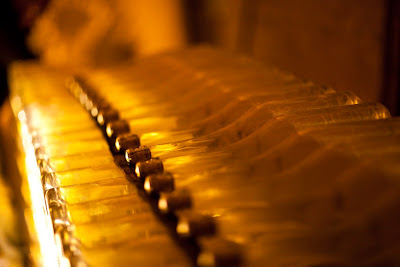 Back at the house again we taste 3 wines - the NV Brut Classic, 1999 Amour de Deutz and the 1998 Cuvée William Deutz. The standard cuvée had signs of too high dosage in my opinion, but did have a subtle nutty feeling, which was fair - but overall a rather anonymous wine. The 1999 Amour was way too young, but I really liked the structure of this wine, which could turn out to benefit the wine with 6-7 years of cellaring. The 1998 CWD was however rather open for business, showing spices, dark bread and chocolate flavors. I don't see this being a long distant runner, but for drinking now + 8 years it's a real pleaser.

I have to say that I have feared this visit could have ended in a trivial big house guided tour (which I have tried before), but Jean-Marc Lallier was more than committed and showed great hospitality to us as gave us insight in the historical evolution of Champagne and the house of Deutz. 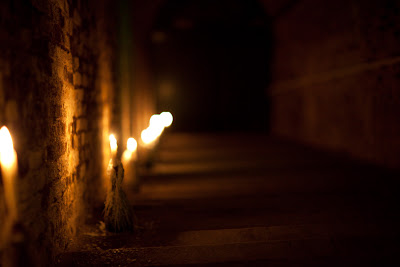 what should I more admirer your writing or your photos.......both brilliant.

Thank you, Martin - you are too kind.