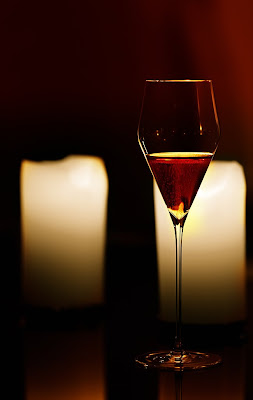 Thought it was time for a Rosé and why not one, which did more than okay the same day @ a Champagne tasting (yes yes...more on that one later).

I had already planned a mix of Italian Antipasti's, and some French cheeses I had in the Fridge (Comté and Langres) and even though I had a feeling about the match would not be perfect, I trusted Champagnes widely food matching abilities. I was wrong. Food & wine was a disaster, so I ended up drinking most of this stuff without food, which actually proved to have a benefit, as simple airing was the crucial for the Champagne.

At opening I found myself in conflict with this cranberry / Campari notes (and I hate Campari), which seem to be a common factor for some of these very young macerated Champagnes. It's not so much that I need to be swept in silky red Rosé strawberry perfumes (and like a Challenge), but it's more the secondary notes of iron, iodine and Sherry (which I also don't like). Combined these notes, even if they have some sort of intriguing affect of just being so different, are a very harmony disturbing element to me.

So, as already said - food & wine was on collision course, so I waited half and hour or so and then returned. Transformation!!!. It's still highly sophisticated Champagne and even if it might be Champagne, which will not be for everyone, you can't argue that it has a strong character and a wide spread spectrum of aromas to offer. These earlier notes of cranberry, iron....etc. feels more subtle, almost replace by herbs and a sweeter fruit component is on the rise; mostly raspberries - which is accompanied by the most delicate note of salty apricot. Salty is an important detail, which in general characterizes its profile a lot to me. On the palate the iron notes are luckily still there as they preserve the linearity and provide a divine sleekness to the Champagne. Evolvement are constantly on the rise and I ended up being pretty impressed and intellectual challenged, but I will definitely cellar my remaining bottles at least 3 years more.

I had this yesterday with oysters,salmon and some pâte, went really well, the notes were more like minerals and berries a good long aftertaste too, simply bonedry, like it a lot, those Pinot Noirs from Aube are really singing.