What else in October 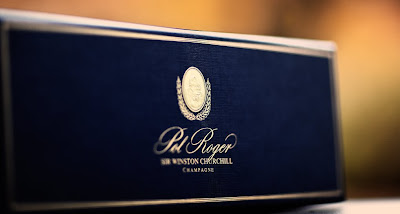 The day before the Montrachet tasting - some of us warmed up @ restaurant Formel B with a small BYO. Formel B is a * Michelin restaurant here in Copenhagen. The food is really good and almost flawless. However - there is something odd about the place. The food have in recent years become lighter, more "flowery" and romantic - but at the same time the place has had a very bombastic facelift, making it almost twice as big. The owners and staff are very young, but still the interior of the place is like a fortress of marble and the waiters (even if they are very friendly) are dressed seriously looking in suits. Even though it should come down to what's on the plate (and its really good) - I don't always feel that comfortable there.

Anyway we kicked off with a terrific 2005 Chablis - the one and only "Le Clos" from Raveneau. I would have expected an overly shy wine to enter and yes it's deadly young, but still has some roundness to it. The acidity is high, but again - a lot of lush new fruit and even some buttery and almonds notes with air. The complexity was spectacular and I found some Champagne resemblance also. Loved it.

The next wine was one of my contributions - the 1996 Pol Roger Winston Churchill. I liked it a lot. It's very powerful Champagne, Pinot dominated, with spices, dark bitter chocolate and walnuts. But it also holds a lot of 1996-vitality with youthful citrus notes and all the time with this vibrant nerve, which really makes it interesting. Taste is long and intense. It should have a long life ahead of it.

The only problem with this BYO, was that it's wasn't coordinated beforehand and didn't went that well with the food. We actually had run out of whites/Champagne and from here it was only reds.

Very difficult to follow such a wine and I had brought the 1997 Masseto from Ornellaia (100% Merlot). I wasn't at all expecting this as I have tasted the wine 3 times. First - it's seriously dark in colour but also filled with blackberries and chocolate flavours. The surprise was high levels of spices to a degree were it almost took form of peppery notes. Now I would never praise such a wine and on top of this its fruit core hold very little soul seeking information to me. However the taste saves it as it's despite its bold character - it has a divine slim curl around the tongue, but still with an enormous finish. This wine is no way near a drinking window as I see it - so cellar at least 5 years more. Overall I have to say, that I have more and more difficulties to find magic in these Italian IGT wines, which I used to love 7-6 years back.

From there it was Bordeaux territory.

The 1961 Lynch Bages was first. It kicked off nicely with classic notes of sweet cedar wood, herbs and tobacco. But to me it died in the glass shortly after - I am not sure the other around the table was of the same opinion.

However I found its neighbour glass far more interesting - the 1971 Cheval blanc. I think it was because it wasn't typical Bordeaux (and forgive me - boring), but had a sensational note of potato chips and again this expressive sweetness. The taste is far from perfect, but the linearity is brilliant. Also it constantly evolved in the glass, where the 1961 Lynch Bages died in my opinion. 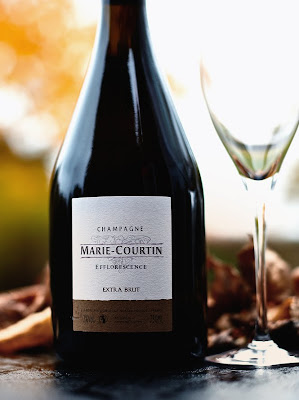 What else in October...

Champagne...have written about most of them, but the NV "Efflorescence" from Marie Courtin was a good memory. It's a rather sleek Pinot Noir dominated Champagne - very intellectual with notes of black cherries and mild spices. Very focused and refreshing - and again this slim (no fuss) and sleek style.

Italian reds:
The 1999 Fidenzio (70% Cabernet Sauvignon, 30% Cabernet Franc) from Podere San Luigi is a wine I have been interested in since I first tasted it in the vintage in 1998 (I believe the first vintage was 1996 - but I am not sure). Fidenzio comes from Piombino, located on the southern Tuscan coast, which also is the home town of one of Europe's biggest steel manufactures; Arcelor. It's said that the terroir here is infected by this raw minerality and I have to say that I also find a lot of iron notes in the wine. Fidenzio always feels young and 1999 is no exception. In fact I suspect that it could very well be one of the most long lasting Italian IGT's out there. With these iron notes constantly there you can imagine how it adds to the wines linearity. It might have somewhat boring blackcurrant fruit, vanilla and chocolate, but it's the presence of these cooler tones which brings the magic and makes you listen. The taste is always (until now...let's see with further age) a pretty rough ride of tannins. You should think that endless hours of decanting might do the trick, but I actually just poured it from the bottle and discovered it to close more and more down in the glass with a lot of tar notes in the final glass. Overall - I would still recommend cellaring, but its fore sure is an interesting wine.

Also from Tuscany I had the 2004 Giusto di Notri (60% Cabernet Sauvignon, 20% Merlot, 15% Cabernet Franc and 5% Petit Verdot) from Tua Rita. The wine is so much better than my first bottle and went down pretty fast. It's a real pleaser with blackberries, chocolate, glycerine, graphite and sweet vanilla flavours. Way too much use of new oak here and not particular complex, if you where on the analytic path, but I was in a mood where I just needed to relax - and for that, it did well. 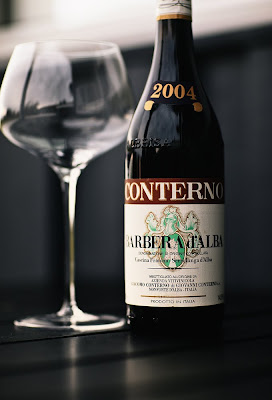 Turning towards Piemonte I had the 2004 Giacomo Conterno Barbera d'Alba Cascina Francia. To me Barbera is a great Pasta companion, but they are sometimes way too many one-dimensional wines with heavy use of oak and too much cheerful blackberry fruit. Even if such a statement is rude generalizing, I have to say that the Barbera from G. Conterno is made in an entirely different style and quality. To me this is the best Barbera there is and it's simply because it's the one showing the best level of red fruit. However this wine has never been better when it was released and even if this bottle was rather nice, I still miss that utterly new pressed fruit which did it all for me 2 years ago. Today it's a bit more reserved and the baby fat has unfortunately evaporated. However, you can still sense the style of the wine and it has a great lightness to it. I think I only have a few bottles left, which I will cellar a bit more - just to see what will happen.

At the rather awkward Italian restaurant Il Grappolo Blu here in Copenhagen, I had (among many wines) the 1997 Brunello Riserva from Talenti from magnum. A wine starting to show notes of new saddle leather and this classic dried Sangiovese fruit. Such a wine immediately hit's my preferences and it's once again a reminder how much I love Sangiovese when presenting itself in this manner. The wine also displays a good portion of red fruit and is basically just classic Brunello as it should be. Maybe not overly complex, but still a beautiful wine. 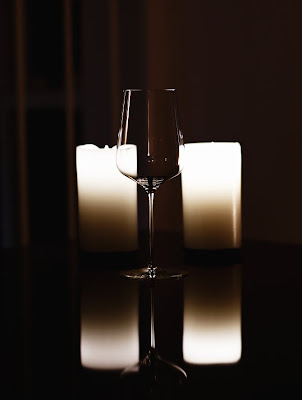 As fall and winter starts I rest my German Riesling, but sometimes it's hard to keep hands off. Spontaneously I opened the 2005 Riesling Spätlese "Oberhäuserer Brücke" from Hermann Dönnhoff in Nahe. What a disappointment it was...well at least just right after I had opened it. Way too opulent, with a dull sweet and fat waxy honey fruit core. Sure the taste was lush, but just an oily thing with no class. BUT WAIT...if there is one lesson I will have to learn about German Rieslings and especially these Spätlese - they need air and a lot of it. Day 2 (just resting in the fridge with the cork 2/3 half way in) - I didn't feel well, but on day 3 I tried it again. Mama mia....what a transformation and what a wine. Ballerina light now, with focus, clarity, brilliance and the fruit core is just like small light weighted exotic and flowery crystallized particles dancing on the tongue. The acidity is exceptional high and it's really an awesome wine. But, wait again...on day 4 it returned to somewhat flabby sweet again...so there you go.
No real tastings planned in November....ahhh almost - tasted 29 Champagnes the other day ;-)...more on that later.
Indsendt af Thomas kl. 7:31 PM

You are spot on in your description of formel B. Or, I feel exactly the same about the place.
Is the food less French-classic these days?

Ps. Have finally started writing my Mistral review, comming soon. Selosse made me think of you... :-)

Well, yes and no. The food has changed to me in the last 2 years. Like most other top restaurants in Copenhagen it’s now lighter and I defiantly see some Noma inspiration as there are more local herbs and vegetables on the plate. But it still seems like the base of the menu is classic (French yes) in some way, with a little twist and with more local ingredients. It’s the sort of restaurant I could easily see my wine club ending up (like this evening), but I would never take my wife there.

And what a compliment….if Selosse (always) makes you think of me ;-)

Looking forward to the Mistral report.

I can see from your (very nice) picture of the Giacomo C. bottle that you've bought the Barolo glass from Era Ora. I just wanted your opinion about the glass since I've been meaning to buy this if it really enhances the aromas of Barolo - and other wines. I've so far used Riedels Sommelier Bordeaux and Burgundy glasses, but wondered if there's a "world" I haven't discovered yet.

Endless choices off glasses will always give small nuances here and there. I think it’s a matter of how geeky you are (and I am really geeky when it comes to glasses).

If you already have such fine stemware as the two benchmark glasses from Riedel Sommeliers you should be well covered (I also have those). But of course The Era Ora glass (Which is from Spiegelau’s Willsberger collection) will give you something else.

Roberto Conterno, whom I visited a couple of years ago, finds this glass ideal for his wines, so that’s the reason why I used it here. It works really well with this wine, and in general it’s a good glass to broaden flavors and repress alcohol. The dried elements of a Barolo shows really well in this glass and the wine will seem more subtle, as will lean the glass somewhat differently, because of the wide opening of the glass. It’s not a glass I would recommend for modern/Barrique Barolo – but old school stuff and preferable with some age.

Hope you found this useful.