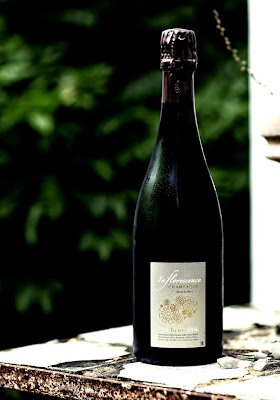 The day after 2000 Dom Pérignon, I needed to have something completely different – something anti-Dom Pérignon style. I could come up with a decent amount of possibilities, but I chose the youngest Champagne I had in the wine cabinet – the 2008 Inflorescence from Cédric Bouchard.

I bought a sample of this wine, together with the 2007 vintage (will taste it soon) and I was told the 2008 might present itself a bit too young with some baby fat appearance. Well – this is certainly the case, as the Champagne is almost like drinking directly from the pressing. The fruit is so juicy, refreshing and almost fat in character. It’s like the wine hasn’t transformed itself into a wine yet – but my God it’s so utterly delicious and I would never ever recommend hands off – even if it will certainly benefit from just having 1 year more in the bottle. The notes are these lush apple juices, even some pear flavour, plus: Melon, citrus, black cherries and currant perfumes. The cherries and currant – are not yet fully integrated, as the fruity components have so much control – but they are in the background, providing edge and character. The taste is lush, incredible juicy and you just have to give in to a wine, which is just so pure, pleasing and pleasurable.

2008 is already called a legendary vintage – it’s still early days, but this is a divine specimen.

Suddenly I forgot all about Dom Pérignon – and was once again reminded why I love Champagne so much.

Sounds deliciuos. Thanks for the bottle and I'm looking forward to drinking it soon :-) And it was very nice to see you & Signe. I hope you enjoyed the afternoon

We had a great time - thank you. Did you finish all the open bottles? ;-)

Have vacation this week - the weather is not exactly great, is it ;-)