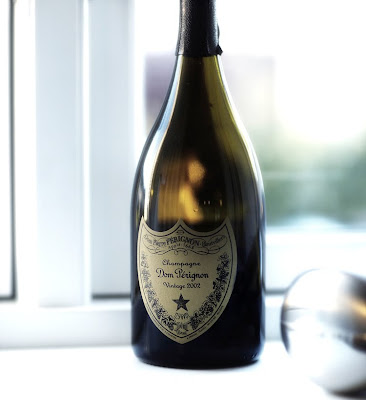 49% Pinot Noir
51% Chardonnay
Production: Secret (a good guess is 5 million bottles)
Dosage: 6 g/l
Glasses: Spiegelau Adina "Red wine"
A new release of Dom hit's the street and it never goes by in silence. One of the newsletters I received – was not exactly humble – but okay, it’s cool to strut if you have what it takes.
"The 2002 is already a living legend" and Parkers quote "Call your bank - line up the truck". Even a beforehand approval from Richard Juhlin, which says - exclusively to this retailer - that it's better than 1996 - even equal to 1961, 1964 and 1976. The e-mail ends with "Empty your bank account and fill up the cellar". I guess this obligates – don’t you?
Let’s taste the beast, which I did with my good friend, Dan.
I don't like Dom Pérignon – period. In fact it has to be the most overrated wine there is. So I am a little biased and it’s probably a waste of your and my time to write this tasting note.
The ’02 are basically the same like most other DP. Same toasted profile, same ridiculous vanilla scent and lack of life and nerve on the palate. It has better citrus appeal than the previous vintages and the spices are not so impure and reductive - which makes it stand taller in the glass. Neither is it heavy on dosage, which can sometimes be the case for big house juice. But my God its boooooooring and I simply don't like how clumsy it feels on the palate, with so little soil energy - just "designed" to be round, pleasing and conservative. I can't go back to drink a Champagne like this - I have tasted so many other things I can't deny.
So I could conclude – once again – a big disappointment. But as my friend Dan here said – it’s probably a supreme Dom Pérignon, if you like this style of Champagne. Well said.
Indsendt af Thomas kl. 8:38 PM

Well THomas,
Bid surprise, it suck like always!!
Hope you got it for free.
I´m tasting some Cedric Bouchard this weekend, this time the big guns..except the Rosé---

Well - the same day I tasted this one - we also had 2005 Haut Lamblee from Cédric Bouchard. It was brilliant and so very not DP in style.