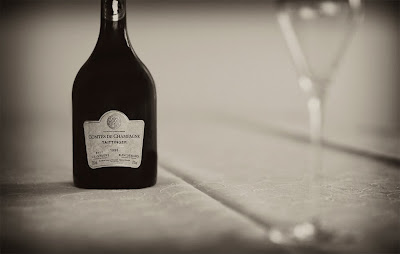 "I have seen things that I can’t deny" (Fox Mulder, X-Files)

I have tasted this Champagne at least 10 times before and I have always been thrilled with it. But it has been at least two years since I have touched it and since then a lot of water has floated into the river of Champagne experiences.

For that reason, I was really looking forward to taste it, as I saw it as an opportunity for taking a current “temperature”, on how I would feel about a very traditional and highly respected Cuvée Prestige.

It’s a pretty bottle and that’s probably the best thing I can say about it. The nose is out of the scale toasted, with dull smoke and trying-to-seduce-me-vanilla flavours – only making it flabby and loose nerve. It’s filled with sulphur notes and combined with the toasted aromas it’s without a doubt (in tough competition with 1996 Dom Perignon) one of the most impure Champagne I have tasted in the last two years. It should be noted, that I am confident it’s sulphur, but in the case of Dom Perignon, some have suggested it’s the result of winemaking without oxygen. If anyone out there could clarify this, I would be interested, because it’s aromas, which are very annoying to me.

For sure it has some flowery and citrus flavours, which could have made a difference, but they are so covered in this sulphur hell, that they never come to life. On the tongue the wine is dead – no energy, no life, no acidity smack, no soil expression – just awful. It’s the first Champagne in a while, where I was not able to finish the bottle – half of it went in the fridge for day 2, where it hadn’t improved at all.

So how can I be ecstatic over a bottle of Champagne and two years later, literally hate it? Can if be phase for the wine? I doubt it. I think it’s me. The fact that I in the last two years have tasted more Champagne than I have in the last 10 years – and most importantly, falling in love with very pure Champagnes. I know where this is going. It’s the same old trivia about little man grower and big house evil Grande Margues. Why has it to be like that – why can’t it just be the pursuit of the taste of good?? I think it’s a little more complicated than that – also because the paradoxes are obvious there and Champagne – like no other region – has this unique and odd setup.

I hope you, as a reader know that I have no agenda other than use this innocent blog as my personal diary and share wine experiences. But admitted – I am sometimes puzzled by Champagnes paradoxes and don’t really get the idea of Champagne as a brand and not a wine with a birthmark from Mother Nature.

This dilemma will keep haunting me. I have a fair stash of Grande Margues in my cellar – I hope the deliver better than this one.

I totally agree, but I only had one bottle ;-)
Next Victim....I still have Cristal, Clos des Goisses, Salon..I really hope Salon will be a winner..it has dosage around 7g/l but a very fine terroir...

I have those names also, Ebbe – plus some other stuff also.

I will have to do some testing in near future.

I am from Indonesia and have enjoyed reading your blog. I was introduced to grower champagnes late last year and was hooked ever since (Leclapart L'Artiste 04 being the first that blew my mind). I totally agree with this. I also have friends complaning afer tasting Dom Perignon and Cristal recently. Looking forward for your next blog.

Oh,
I forgot DP Rosé and Krug.....Cristal says 11g/l dosage
maybe some creme caramel would do!!

Glad you like the blog – makes me really happy.

Actually 2004 l’Artiste is a perfect example to illustrate how different grower Champagne can be, when comparing them to names like Cristal and Dom Perignon.

Ebbe – I think Roederer has made some significant steps in order to change their wine growing. The 2000 Cristal is however overly sweet – I am confident you will hate it. The 1996 don’t feel that sweet – but it’s been a while since I have tasted it.

We had a Comtes de Champagnes Tasting last night. Seven Vintages, 95, 96 and 82 the better ones, but not one really good champagne. Soulless, uninteresting taste for the mainstream, like Dom, Moet, Veuve.... The sparkle was out of the champagne in the glass after 10 minutes. Terrible. Then we opened a bottle of Diebolt Collection 1997 - nice one!