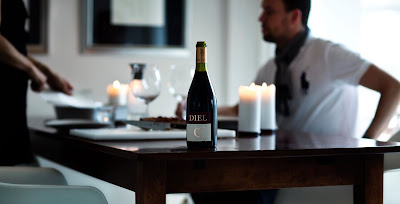 Let’s start the other way around –with the red wines. I am beginning to have an appetite for reds again. But this time, it’s especially fragile examples, with clean red fruit. Everything is of course pointing in Pinot Noir direction >>> Burgundy, but the wines from Jura is something I hope to explore even more in future. Even so, the last few months also brought some of my same Old Italian wines – both good and bad, as you will see.
German Spätburgunder Diel “Caroline”, 2005 vintage, is a wine I have enjoyed with great pleasure in the past. Every time I have tasted this wine, I have simply just poured it into the huge Riedel Sommerliers Burgundy Grand Cru glasses and the wine has instantly been singing. But not this time. The first half of the bottle was a huge disappointment, as the cherry notes were overripe, almost grilled, and not possessing the clean fruit I always search for. Also notes of pâté and burned rubber were a part of the aromas. However, the second half of the bottle, where I had rested it for an hour, was much better. Still not up to the quality I remember it for, but now demonstrating clean and seductive red fruit. Overall, even if judging by the second half of the bottle, I still missed a lot of layers, better curl around the tongue and the last note of purity in order for this wine to really impress me.
Italian reds are always regulars at these wrap-ups as I still have a fairly large stack left in my cellar. 1999 Ornellaia was one of them and what a huge disappointment it was. The nose consists of fairly boring blackcurrant notes with a lot of oak influence, which results in aromas of dark chocolate and vanilla. I find the complexity very low here and it's basically Bordeaux in an Armani suit. For some it works – but not for me. If to find anything remotely positive - it should be that the wine seems somewhat shy. It could be a phase – who knows? The recent “1999” Percarlo was not good either.

Speaking about Percalo, well on a cosy Monday, after a game of squash with my good friend Claus (have forgotten who won the match ;-)), we had a relaxing dinner with our families. 2001 Percarlo was my wine and what a wine. Served directly from the wine cabinet and of course a touch cold, it provided sensational appeal. Bursting out of the glass, with Tuscan spirit and red fruit all over it. The oak influence is obvious and maybe a notch too much for the intellectual taster, but my my, it’s so bloody seductive and so fruit driven that the irresistible-factor is killing all causes for doubts. We all loved it and to me the 2001 Percalo ranks among my all time Percarlo favourites. 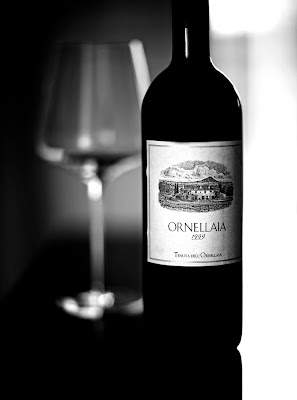 The same night we had a solid good red Burgundy, the 2006 Robert Chevillon Nuits St Georges “les Vaucrains” – which is still very tight, with a lot of bitter components and spices, but the potential is there, even though the red cherry red fruit is not fully giving now. Curls great on the palate and despite its age serving complex drinking pleasure. Cellar 4 years.

If my memory is still intact – the last red wine on that Monday was the 2007 “Langhe” from Aldo Conterno. A good pasta friend for daily drinking, but could have had a better level of purity.

More Italian, but served the week before was the 2001 Barolo “Marenca” from E. Pira. It ended up being a fantastic wine, even though in didn’t posses much of the red fruit I also hunt in this region. In fact the wine is “black” – covered with dark cherry notes, dark chocolate and black violent fruit – but this is so genuine and with enormous concentration, that I had to surrender myself. What a great effort and I even have more of this in my cellar – even if there is absolutely no hurry to drink.

I also tasted a brand new wine from Burgundy – more specific Macon. A 2007 Mâcon-Cruzille "Les Rosiers" from Domaine Clos des Vignes du Maynes. Blessed with bright red cherry aromas, cool tempered, slim, elegant – but yet so expressive and with enormous drinking pleasure. I will taste it again and dig deeper into details. 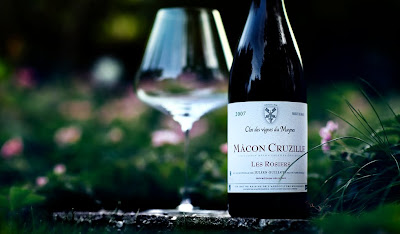 Only a single one, if my memory is correct….should the Danish spring/summer weather start to show a more friendly side I will hopefully have much more “whites” for you. In May I had a 2008 Bourgogne blanc “Le Combe” from Domaine Derain. Even if it’s an entry level wine, it showed vivid buttery sensations, flowers, hay and melon. With air, the buttery components took a step back, allowing the flowery components to come forward and you get a lot of Puligny Montrachet association. I will hopefully taste it again – but also try other “Derain” whites.

I held a small seminar on Champagne, which was a lot of fun. I am not trained at this, but in order to make it work – not only for me - but also my audience - I took the role of a wine geek and basically just tried to send small dozes of inspirational Champagne virus in my audience direction. I had of course also brought some Champagnes which I also tasted - just a little bit of – just to test you know ;-).

I early May I tasted a recent disgorged (Nov-09) V.O. Version Originale from Selosse. It started a bit tame, with a somewhat oily and too oxidised profile. However, as the Champagne rises in temperature and the bubbles are secondary, a vinous beauty unfolds. The nose is now delivering pure apple fruit, ripe sensations and deep oaky perfumes. Once again, a Selosse Champagne, which started oxidized and dull – but with air gained tallness and balance.