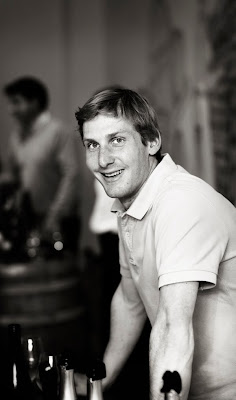 
Last year Raphaël Bérèche and his friend Aurélien Laherte decided to put on a little tasting event @ Goutorbe's beautiful Castel Jeanson Hotel in Aÿ – named Terre et Vins de Champagne. The tasting was a huge success, demonstrating how much attention and curiosity some of the new frontiers on the Champagne scene are causing. Unfortunately I didn’t know about this tasting last year and only discovered it’s existent when I read about it on Peter Liems blog. Luckily this wasn’t a one off event and I am confident that Terre et Vins will be a recurring, not to miss, champagne event for all farmer fizz lovers.
Still the 2010 event will be remembered (hopefully) as a very odd Terre et vins de Champagne year. I am of course speaking about the eruption of the Icelandic Volcano Eyjafjallajökull, which caused air traffic across Europe to stop and cause complete chaos. Most of those attending from Asia and US missed it - even Peter Liem missed it - what a shame. My own situation didn’t look good either. I was supposed to fly to Paris – meet up with some friends for lunch and head by train to Epernay and attending the event early Monday morning. But no – my flight was already cancelled on the Saturday before my departure. I had already set my mind on staying home and my Plan B basically came down to rinsing my sorrows with a great bottle of Champagne. But luck came my way in the very last minutes. My best friend, Claus and I- had some weeks before the event talk about what a shame it was, that he couldn’t come to Champagne with me, as he was expecting some guest from US. But the flights from New York to Copenhagen was of course also cancelled, so he called me and so we made a quick decision and started the car. 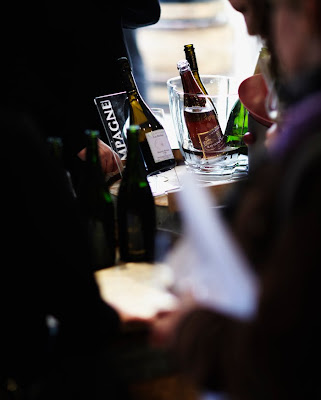 So early Monday morning the 19th of April, I had my first glass of Champagne in my hand. Why can’t all Mondays be like that?
Click here to see which producers participated.
Each producer had brought about three 2009 vins clairs samples and in most cases the matching Champagnes from the current release. It’s of course really interesting to taste so many vins clairs for comparison and getting an idea about the 2009 vintage. But it takes enormous concentration and it’s hard when you just stand up and also want to make conversation with the some of the very friendly producers. I started writing notes, but simply stopped shortly after and just tried to use my senses.
Here are some of my personal highlights. Forgive if I have forgotten some – they where really not any bad Champagnes present.
It’s always difficult to present a vintage, which comes next to a highly acclaimed year. Already in my visit to Champagne last year, I saw how ecstatic the producers where towards the 2008 vintage. 2009 is not at the same level – so it seems at this early stage, but early days still suggest 2009 as being a solid good year. 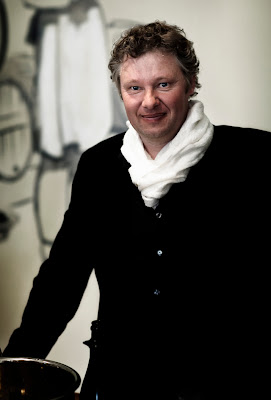 (David Léclpart)
Aurélien Laherte served the latest release of Les Clos, which you may remember is a blend between the 7 Champagne grape varietals. It’s also a Solera Champagne, with has its starting point in 2005. The newest release is even better than the first – more layers and again incredible fresh. I love the fact the grapes from Le Clos are harvest at the same time, giving some of them this high pitched grape notes and one hell of an acidity smack. Freshness is the key for Laherte and his splendid Brut Nature is a great QPR for all purist hunters.
David Léclapart poured his astonishing 2006 Amateur (see my review here), which to me was better than 2005 Artiste and 2005 Apôtre. The 2005’s feels like they do not possess the same bright energy of the 2006 vintage. It might just be a matter of cellaring. David’s 2009 Vins clair are like floating black mineral nerve – it takes a lot of focus and experience to judge these wines. 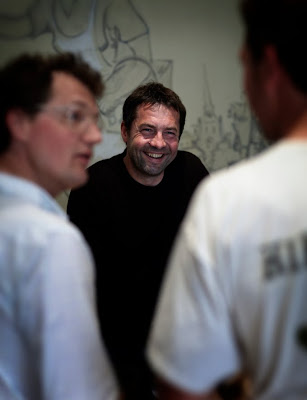 (Pascal Agrapart)
That was actually also the case with Pascal Agrapart’s vins clairs, but still more chalk driven samples and not particular friendly and flowery perfumed as some of the other vins clairs. But tasting Pascal’s 2004 Champagnes makes you realize what such juice can be transformed into. All his 2004’s (Mineral, Avizoise and Venus) are brilliant. Especially 2004 “Venus”, which I have already tasted a couple of times before, is magical.
From Agrapart I walked over to Raphaël Bérèche, which style is completely different. Already at Vins Clairs level do you have wines with more vivid fruit sensations, such as lush peach scents. But both his vins clairs and Champagnes seems bound for an even more slim, elastic and elegant style. Raphaël poured his not yet released 2004 Vintage (Non-dosage), which made me smile a lot. It’s ones of those Champagnes which holds vivid ripe fruit, making them seem sweet, but it’s really an extremely seductive Champagne - yet fragile and very mouth coating on the palate. I think we are talking September before it will be released. I can’t wait to taste it again. 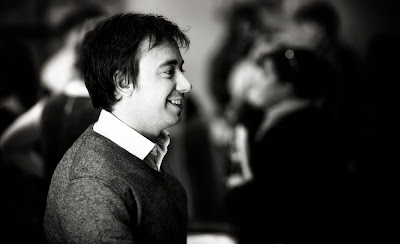 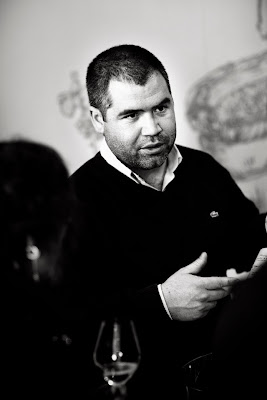 (Benoît Tarlant)
The diversity of Champagne is highlighted at such an event – just take a producer like, Tarlant – which sent their top man to the event; Benoît Tarlant ;-). Benoît presented some of the most concentrated Champagne at the event. He presented a newly disgorged version of 2000 “Vigne d’Antan”, which was more broad shouldered than the first release. He also brought a fresh disgorged 2002 “Vigne d’or”, which was once again a volcano (a good one) of dark Pinot Meunier fruit, with quince and honey notes. It will need another 6-12 months to settle down I think and it’s being released shortly. I will have more “Tarlant” for you, as I visited Benoît the next day.
What else? 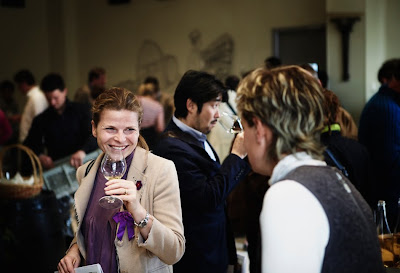 (Champagne makes you smile)
Alexandre Chartogne is a name to look out for. His wines are not available in Denmark yet, but he makes fantastic feminine wines. I will hopefully taste his “2002 Fiacre” in near future, so I can get more acquainted with his style. Françoise Bedel and her son Vincent Desaubeau was also present. Their wines are really dense with a significant trademark of biodynamic winemaking. They have made an fantastic accomplishment with their “Dis, Vins Secret” in the difficult vintage 2003.
One should not forget Benoít Lahaye either, which makes really fresh and drinking friendly Champagnes at bargain prices. 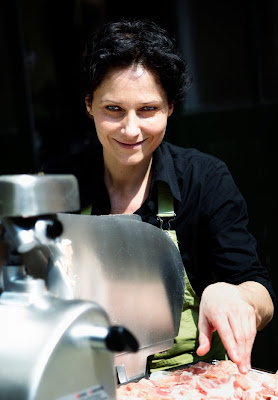 (We where nursed with fresh Parma ham and cheeses all day)
So it ended here one should have thought. But as I stayed at Hotel Castel Jeanson, where the event was held, why not join the wine makers in a small after party, where I got the chance to taste almost all of the Champagnes again. It was suggested to me, that I should have taken some pictures from this very cosy and joyful get-together, but some moments are just better enjoyed while you are there and shouldn’t always be captured on “film”. The only thing I can “illustrate” for you is that a Champagne cork can actually fly around 50 meters, if you give it a decent push – just ask Benoît Tarlant ;-).
A special thanks to Aurélien, Raphaël and Benoît for your generous hospitality – see you next year.